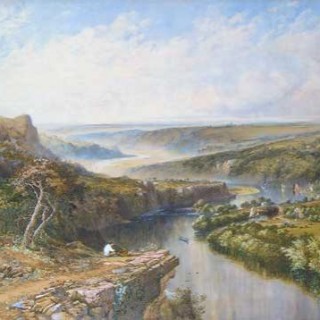 Watercolour and bodycolour. Signed and dated 1862.
The Tamar Navigation Canal was opened in 1808 to bypass a weir which had been built centuries earlier by the Abbots of Tavistock on the stretch of river between Morwellham and Gunnislake. The weir prevented boats from sailing further upstream and a detour was vital for the area’s economy. The canal allowed barges to transport their cargoes of lime, sand, bricks, manure, coal and granite to important industrial, horticultural and agricultural sites in The Tamar Valley and remained in use for more than 100 years. This bird’s eye view, from the steep, granite rocks high up on the Devon side of The Tamar, shows the canal and, in the distance, the meanderings of the river towards Calstock and on to Plymouth Sound and the open sea.