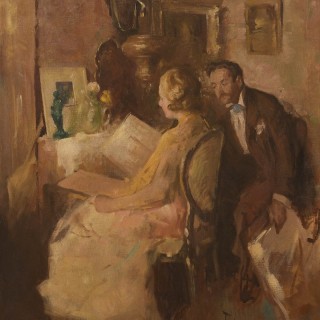 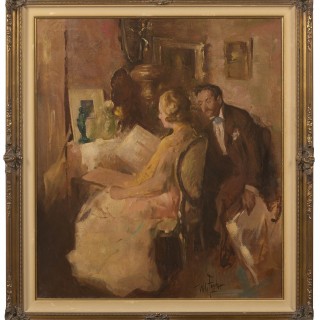 Original Oil on canvas by Modern American artist and illustrator William Frederick Foster.
Professional illustrators have always made great figurative painters. They bring a technical facility and finely honed draughtsmanship to their art that many conventional painters in the same genre lack. Foster’s deftness of brush and narrative movement made him one of the most successful illustrators in a golden era of American illustration. We have two large oils in the exhibition, a studio nude and a genre painting. The nude is great fun, it took me some time to work it out but she’s loosening her hair from behind and it has fallen over her face, possibly a device to discretely spare his sitter’s blushes. The second ‘The Travel Brochures’ could be a scene from a G K Chesterton, an enthusiastic young bride plans a trip while a far less enthusiastic husband rues the lost time with his newspaper. Both beautifully rendered and so redolent of 1930s America.
Available at Panter and Hall.

Foster was born in Cincinnati, Ohio and spent most of his childhood there apart from a three year sojourn in Colorado. In 1898 he enrolled at the Cincinnati Art Academy where he studied under Joseph Henry Sharp and Frank Duveneck. In 1902 he moved to New York where he kept the wolf from the door by painting theatrical scenery and backdrops for large department stores. Meanwhile he studied at the New York School under Robert Henri and William Merritt Chase. In 1903 he sold his first illustration to ‘Life’ Magazine and began a successful career as a graphic artist working for all the principal publications of the day including From that time, he worked for most of the major magazines including ‘Collier’s’, ‘The Saturday Evening Post’ and ‘Harper’s Monthly’.

During the Great War he served with the American Volunteer Motor Ambulance Corps in France and spent some time as a camouflage artist. On his return he moved to Chicago where he taught at the Art Institute. In 1926 he won the National Academy of Design’s Clark Prize for the best figure composition painted in the United States by a non-academician. The following year, he was voted an Associate Member based on recognition for his painting The Girl in Brown.

After the Second War he moved to Los Angeles and devoted his energy to painting, exhibiting, and teaching. He taught at the Chouinard School of Art in Los Angeles and gave private classes in his studio. He also worked on a mural project at the Hearst estate in Wyntoon, California and was an active member of the California Art Club.