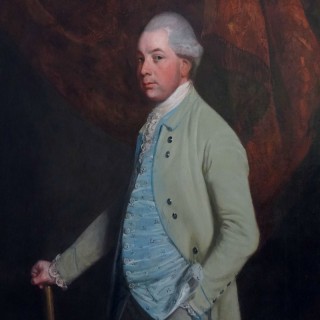 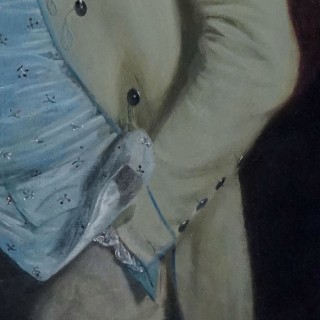 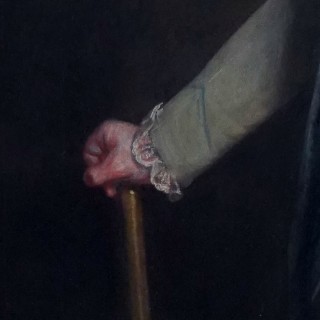 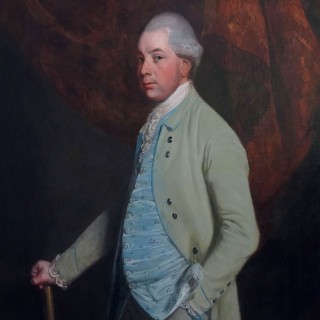 Portrait of William Craven, 6th Baron Craven of Hampstead Marshall, Berkshire (1738-1791), three-quarter length, standing in an interior, wearing a blue silk embroidered waistcoat under a pale green jacket with silver buttons, resting his right hand on a cane and his left in his pocket, wearing a powdered wig.

During conservation and restoration of the portrait, the revealing of various pentimenti in the sitter’s clothing and posture suggests that it may have been used as the basis for a more complex full-length portrait painted by Beach in 1778 of William holding the architectural plans in his study of Benham Park, the country seat of the Cravens in Berkshire. This was listed in the paintings inventory of Coombe Abbey, the primary seat of the Earls of Craven in Warwickshire in 1866 and sold at Sotheby’s Paris in the Robert de Balkany sale, 28 September 2016, lot no. 235, for 65,000 euros.

The cleaning of the portrait involved the removal of the dark overpainted background (probably added in the 19th century to appeal to the Victorian taste of the owner), which revealed William to be standing against a russet coloured fringed drapery in an interior, a setting more expected for a portrait of this quality and period. Another version of this portrait of William by Beach in an identical pose with the same drapery background, his hand resting on a faithful hound’s head as opposed to a cane, was sold at the Croxteth Hall sale through Christies in September 1973. (image and reference, Paul Mellon Centre London). Croxteth Hall was the seat of the Earls of Sefton and William’s sister Maria Craven had married William Molyneaux, the 2nd Earl of Sefton. It is likely that our portrait, like this one was commissioned and given as a gift to a close family member or friend.

William Craven was an English nobleman. He was the son of Reverand John Craven of Staunton Lacy, Shropshire and succeeded his uncle, William Craven as Baron Craven in 1769. In 1775 he built Benham Park at the site of Benham Valence in Speen, Berkshire where he lived with his wife, Lady Elizabeth Berkeley. The marriage however was not a success. Both Elizabeth and her husband had affairs, notably Elizabeth’s scandalous liaison with the French ambassador, the Count of Guines, in 1773 which was featured in the pages of The Morning Chronicle. Eventually Elizabeth left him in 1780 to travel around Europe. They had three sons and four daughters. After William’s death at age 53 on 27 September 1791 in Lausanne, Switzerland, Elizabeth married the Margrave of Anspach.
Lord Craven was responsible for building the original cottage at what is now known as Craven Cottage, the home of the Fulham Football Club, next to Bishop’s Palace in Fulham, London.

Thomas Beach RA (Milton Abbas, Dorset 1738-1806 Dorchester) was a British portrait artist who studied under Joshua Reynolds. He moved to Bath where he established a very successful portrait business. He exhibited at the Royal Academy in London every year from 1785 until 1790 and again in 1797 when he had moved to Kew, London.

The collection of the Boyden family, Dewlish, Dorset, England.