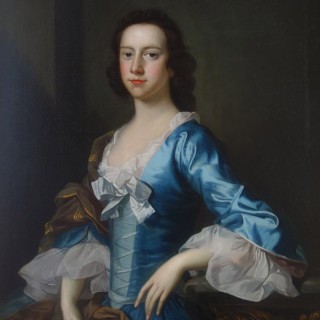 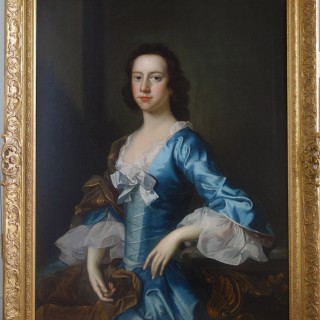 Provenance:
By descent in the family until circa 1912
With Ehrich Galleries, New York
Purchased (together with a Gainsborough and several other
portraits) by Martin V. Kelly of Toledo, Ohio in 1918
and thence by descent.

This is a very rare signed and fine early portrait by English artist Thomas Hudson.
Thomas Hudson was born in Exeter in 1701. He was a pupil of the artist Jonathan Richardson and married Richardson’s daughter Mary in the early 1720’s. Until Richardson`s retirement, Hudson painted portraits mainly in the west country, including Devon and Bath. His earliest portraits are documented in the accounts of the Courtenay family of Devon for 1728. On Richardson`s retirement, Hudson gained a number of his master`s clients and became more prominent in London. He collaborated with the Flemish artist Joseph Van Aken as his drapery painter and his work soon showed the influence of the portraits of Van Dyck. Hudson painted around 4,000 portraits during his career but only around 80 are known to be signed. Among his best-known portraits are ‘Theodore Jacobsen’ (1746, Thomas Coram Foundation, London’, Lady Mary Andover’ (1746, Ranger’s House, Blackheath, London), ‘Charles Spencer, 3rd Duke of Marlborough and his family'(c.1755, Blenheim Palace, Oxfordshire) and 2 portraits of George Frideric Handel (1748, Universitatbibliothek, Hamburg and NPG, London). His success attracted many apprentices, including Joshua Reynolds and Joseph Wright of Derby.
In 1770 after his retirement to Twickenham and the death of his wife he married Mary Fynes He died in January 1779.
Literature: ‘Hudson, Thomas’ (bap.1701, d.1779) Oxford Dictionary of National Biography, Ellen G. Miles, version 2008. 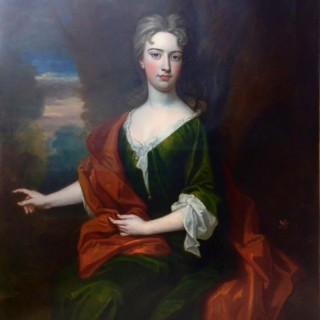