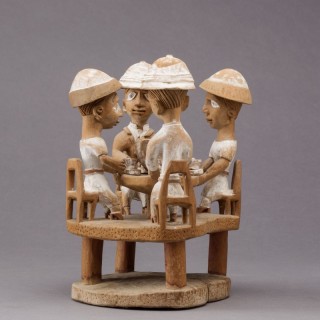 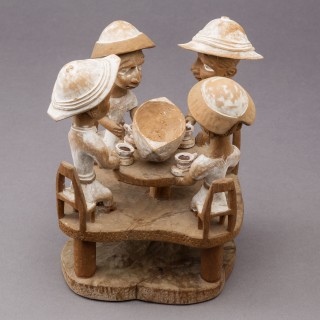 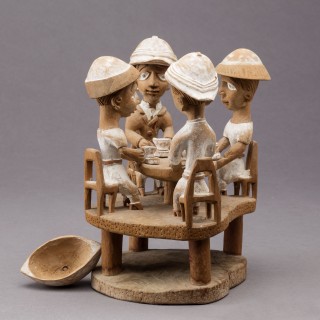 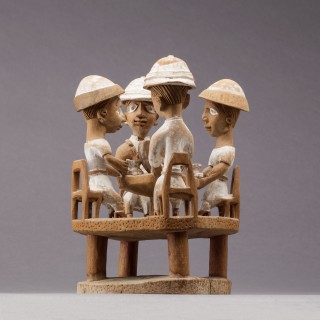 A charming group showing two couples taking tea together by the noted Yoruba carver, Thomas Ona. The ladies wear simple, belted, short-sleeved summer dresses and heeled shoes; the gentlemen are in long sleeved shirts and one wears a jacket. Both have long trousers are are wearing pith helmets. Each of the figures is seated with their hands on the table and in front of them a cup or plate with a serving tray in the centre. The ground on which they are sitting is raised on four columns giving the group a sense of importance.

Thomas Ona was fascinated by costume and portrayed both Yoruba and Colonialists with their accoutrements of power. Although his subject matter is innovative the figures are carved in the traditional manner in soft wood using an adze and a knife. The proportions are also long-established as the Yoruba people regard the head as the most important part of the person so it is always many times larger than life-size. However, whereas traditional Yoruba carvings are sculpted from a single piece of wood, Ona’s carvings are frequently made from a number of pieces and whereas traditionally vegetable dyes would be used, Ona coloured his sculptures using red and black ink and white shoe polish, often leaving some areas, including the flesh, in the natural wood colour. Although Ona’s carvings have sometimes been identified as satirical, Ona told Bascom*, circa 1940, that “his works simp30.01.2014ly showed how he viewed the world around him” (see biblio), and indeed if one compares the treatment of the facial features, particularly the eyes, to those of ibeji from Ijebu-Ode, one can quite clearly see that they are carved in a traditional manner and are not caricatures.

Thomas Ona was born in Ijebu Ode and moved to Lagos, some 100 or so kilometres away where he made many wood carvings mainly for the British Colonialists and visiting travellers in the early part of the 20th Century. His carvings of Yoruba included traditional roles such as mothers and children as well as new colonial occupations such as policemen and postmen. The colonial carvings were equally varied with many administrators, lawyers, missionaries, even Queen Victoria. His work is now held in Museums the world over.