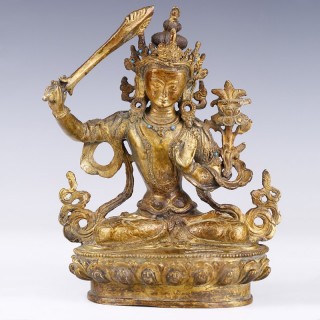 A finely modelled bronze statuette depicting the Bodhisattva Manjushri, one of the most important figures in Buddhist religion, who is considered the Bodhisattva of Wisdom. The figure appears seated in Dhyanasana on a lotus flower-shaped base, with the legs crossed and the feet facing up. He is portrayed wearing an elaborate floral headpiece and holding a flaming sword in his right hand, while his left hand appears in the Vitarka mudra. A stem of a lotus flower, one of the main attribute of Bodhisattva Manjushri, extends from the lotus-shaped base, coiling around the figure’s left arm. Details of the jewellery the figure is portrayed wearing have been enriched by turquoise cabochon insets. The statuette features a hollow base in order to contain Buddhist relics, which were placed inside before sealing it. Statuettes, such as this beautiful example, were placed in temples and shrines, as a way to accrue the merit needed for good karma in Buddhist religion.

From a private UK collection, acquired on the London art market 1990-2000.

Extremely fine, some signs of wear to the surface.