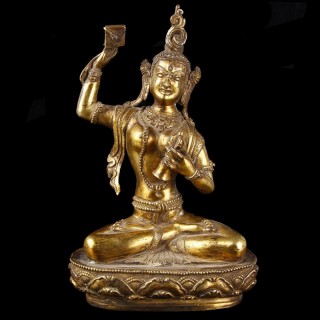 A finely modelled gilded bronze statuette depicting Machig Labdron, a renowned 11th-century AD Tibetan Tantric Buddhist practitioner, master and yoga teacher. The female figure appears seated in Dhyanasana, with her legs crossed and her feet facing up on a lotus flower-shaped base. She is portrayed wearing an elaborate headpiece and holding a Dril Bu bell in her left hand and a Damaru drum in her right hand. Further attributes of this historical figure include the third eye to the forehead and the wearing of bone ornaments, such as necklaces, bracelets, armlets and anklets. The statuette features a hollow base in order to contain Buddhist relics, which were placed inside before sealing it. Statuettes, such as this beautiful example, were placed in temples and shrines, as a way to accrue the merit needed for good karma in Buddhist religion.

Machig Labdon’s teachings are at the base of her own Chod, a Buddhist spiritual practice that can be found in Tibetan Buddhism and which aims to cut through the ego of the individual. One of her most famous teachings is Feeding your Demons, a practice which aims to embrace whatever obstacle might trouble the individual in order to defy it. Machig Labdon is usually depicted in Buddhist iconography, seating or dancing on one foot like a dakini, an enlightened female energy, and holding a Damaru drum and a Dril Bu bell. Both objects, the bell and drum, are essential to the Tibetian Buddhism practice: the Dril Bu bell is used during the recitation of the mantras and the Damaru drum is played during celebrations.

Condition: Extremely fine, the metal is in very good and stable condition.