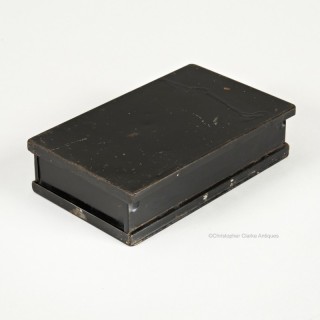 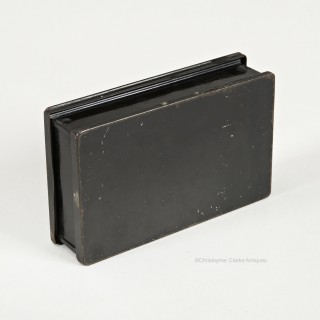 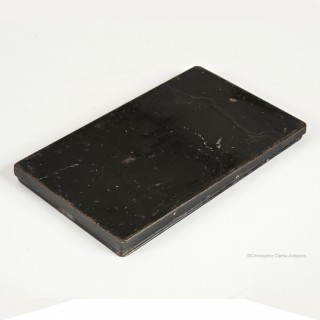 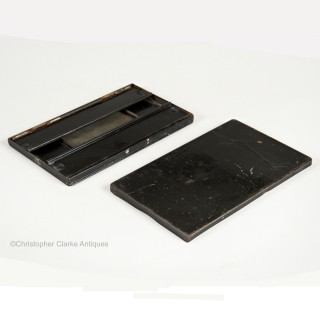 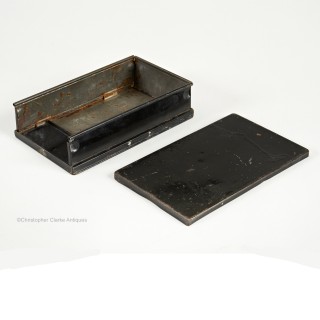 The original patent on this japanned sandwich case relates to its action of flat packing once empty. The height can be reduced from 1 1/2 inches down to just over a quarter of an inch.

The short sides of the box are held in place by indentations to the long sides. Once the long sides are pulled slightly further apart, the hinged short sides will fold flat against the base. The long sides, which are also hinged, will then fold on top of them and the lid can be put back on.

The original patent was taken out by G. Hollinshed of Salford in the 1880s. He manufactured the tins but also licensed the design to other companies such as Griffiths & Browett of Birmingham. These tins typically have brass name plaques. They also have a very slight difference in design: the long ends have a pin set at a right angle which inserts into the turned lip of the short ends to hold the sides upright. This box fixes the sides by the indentation to the long sides.

It is probable that the manufacturer of this tin purposely left their name off as they knew they were likely to be breaking Hollinshed’s patent. The surface rust to the interior, as you will see on the video, has now been cleaned off. Late 19th Century.

Some scuffing to paintwork