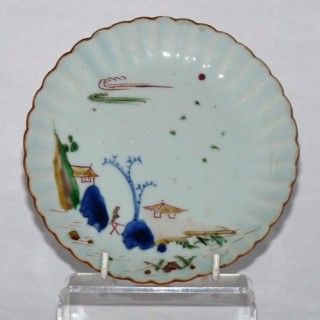 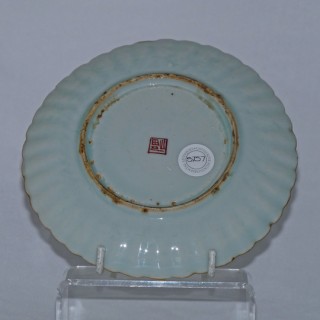 Chinese late Ming 17th century Transitional wucai moulded dish. Made at the end of the Ming Dynasty at Jingdezhen probably during the reign of the Emperor Tianqi or it may be at the start of the Emperor Chongzhen’s reign.
Painted to the centre with a ‘scholar’ crossing a bridge to an island with a low pagoda type building, rock work and a pine tree. The water around the island is strewn with boulders. The sky has a flight of birds, red sun and wispy clouds
The modelling of the plate is to resemble an open lily pad or lily flower.
To the underside is an over glaze square mark – ‘Fu’ mark for happiness.
The Chinese Empire required money and the trade with Japan proved lucrative but the items had to appeal the Japanese aesthetics for the tea ceremony and so often deliberate flaws were introduced during flaw, in this case a slight missing on the brown line around the rim and grit around the foot rim.
To understand more about this trade please see my article ‘Who Am I’ in my article section of my website.