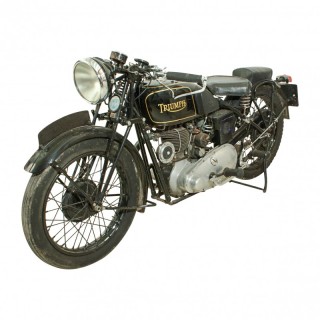 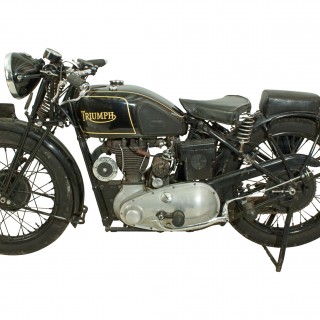 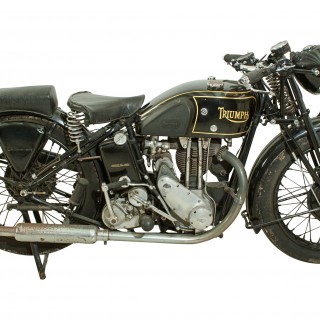 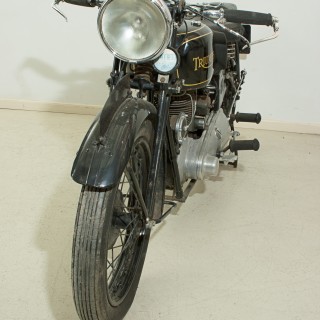 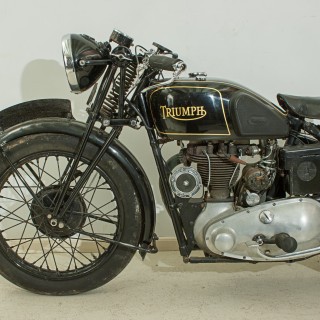 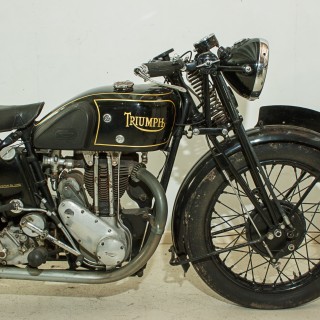 1936 Triumph Motorcycle Val Page Design.
An original 350cc Triumph Motorcycle, model 3/2, first registered in 1936. This Triumph bike is in very good condition with original matching engine and frame numbers Tax and MOT exempt, black colour, re-registered in 1980’s to NSG 619A. This wonderful Triumph comes with original buff log book and various old MOT certificates. It is a ridged frame, single cylinder 350cc ohv, built at the Coventry factory. It has girder forks with a sprung seat and pillion saddle over the rear mud guard. It was set up for hand gear changes but has been converted at some stage to foot control.

Since Charles Hathaway died in 1915 Triumph struggled to find a designer that would make Triumph successful again. The 1931 range had been designed by Arthur Sykes, although great to look at the oil pump proved problematic. Valentine Page (1891-1978) was an innovator who had been with Ariel Motorcycles since 1925. He helped design the successful Ariel Red Hunter, which continued until Ariel ceased production of four strokes in 1959. With a vacancy for a designer at Triumph Val Page left Ariel and by 1934 they had a very successful engine. Val later worked for BSA and his designs include the BSA Gold Star, BSA A7and BSA M20. Triumph Motorcycles, with Page and Edward Turner (who took over as chief designer and managing director in 1935) developed Triumph’s first parallel twin, the model 6/1, and a range of singles, including a 150cc two-stroke and 250, 350 and 500cc four-strokes.
Turner wanted to make Triumph more efficient by dispensing with the large unnecessary existing range of machines. He created the Tiger’s. The Tiger 70, 80 and 90 were all based on the previous Val Page designed bikes 2/5, 3/2 and 5/5 respectively. They incorporated some new styling elements, new names, Tigers 70, 80 and 90, but the bikes were really Page’s models with a facelift.