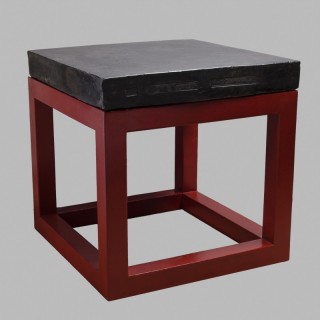 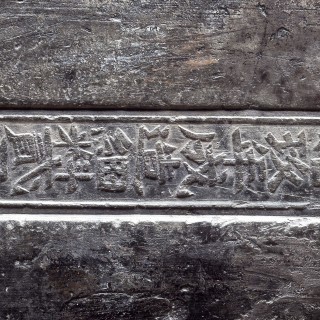 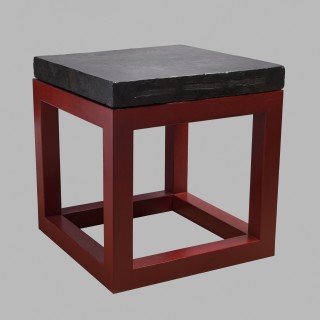 These bricks were made for Emperor Qianlong for the Forbidden City or one of his palaces. Building began on The Forbidden City in 1406 and it became the Imperial Palace in 1420. However building, alterations and renovation continued through the centuries and much work was undertaken by Emperor Qianlong who reigned from 1735 to 1796. These floor tiles are dated 1749 and 1784.

The inscription reads:
‘Made in 14th year of Qianlong, with fine materials 2 feet by 2 feet of brick/tile’

The inscription reads:
‘Made in the x9th (possibly 49th) year of Qianlong, with fine materials 2 feet by 2 feet of brick/tile)

Bricks of this superior quality made for the Imperial Palaces became known as Golden Bricks, possibly because of the metallic sound they made when tapped or more likely due to their high value. Although bricks and tiles had been made in China since 1000 B.C. the craft of making these extremely large, hard wearing, dark and lustrous floor tiles for the royal palaces was a particularly long and complicated process requiring a specific very fine clay from Suzhou.

According to the Ming Dynasty (1368 – 1644) Illustrated Book on the Selection of Bricks, after being put in the kiln, they were smoked with husks for a month, burnt with firewood chips for another month, with twigs for a third month and pine branches for another 40 days. After the 130 days they were allowed to cool and were taken out of the kiln. The cost of making just one brick was equivalent to the cost of 50 kilos of rice. Another account reports that during the reign of the Ming Emperor Jiajang it took three years to produce just over 5,000 bricks of this quality averaging 5 per day.

The fired bricks, each one inscribed with the date of manufacture, measurements and the name of the craftsman who made them or his supervisor would be transported to the capital by the Hangzhou-Beijing Grand Canal, solely for the use of the emperor.

Finally, the laying of the bricks, as with their making was minutely prescribed: one bricklayer with two helpers ground and polished each one to fit its neighbour precisely and they were soaked with raw tung oil to a lustrous dark finish resembling black jade.

The Emperor Qianlong who reigned for 60 years is known for eliminating the Turk and Mongol threats in the north east, enlarging the Empire by creating Xinjiang (1.6 million square km ) and reinforcing Chinese authority in the south and east as well as his sponsorship of a compilation of Chinese Classics although he was also responsible for the destruction of all writings with an anti Manchu slant.