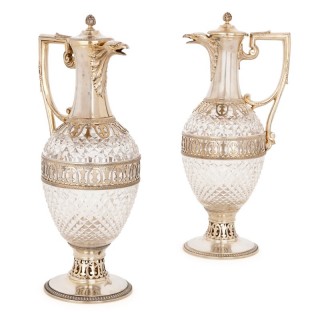 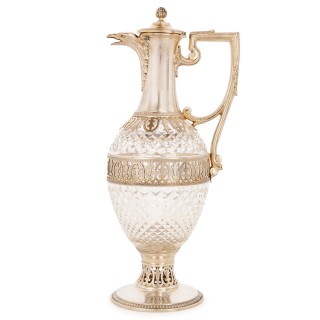 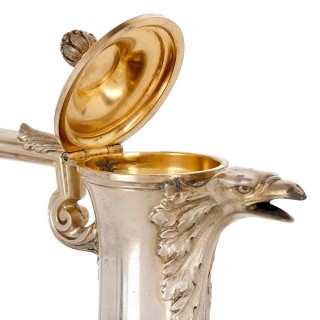 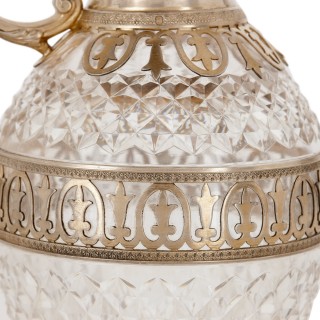 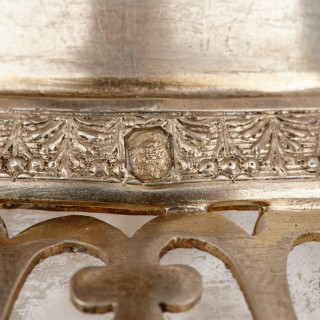 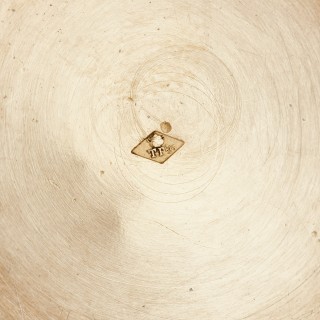 These elegant claret jugs were crafted in the early 20th Century by the acclaimed French silverware company, Tétard Frères. Tétard Frères was the name adopted by the three brothers Henri, Jacques and Georges Tétard, after they inherited the firm from their father, Edmond Tétard. Tétard silverware was highly sought-after by the French aristocracy in the late 19th and early 20th Century. These jugs are fully hallmarked.

The jugs are of typical form, with ovoid bodies, fitted with elongated necks, handles and stems. The silver necks of the jugs are covered by lids, topped by pinecone finials. Their interiors are gilded, creating a beautiful contrast with their silver exteriors. The jugs’ necks are mounted with silver spouts shaped like eagles, and with leafy geometric silver handles. The bases of the necks are decorated with pierced stylised down-turned anthemion patterns. The jugs’ ovoid bodies are crafted from glass which has been finely cut with diamond patterns, and their middles are encircled by pierced silver anthemion bands. Each jug stands on a silver stem which is decorated with pierced anthemions, and which flares outwards to form a circular foot, edged with a gadrooned band.