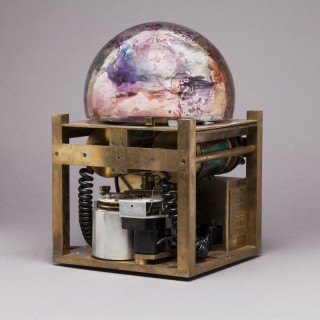 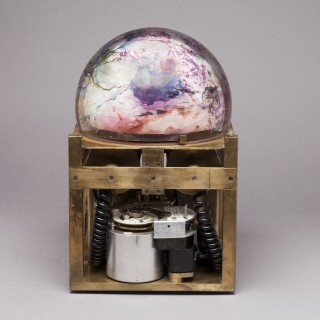 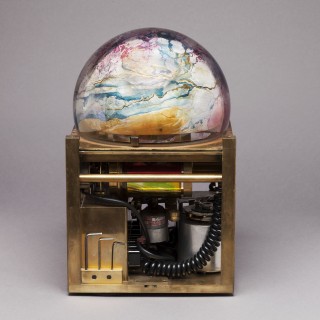 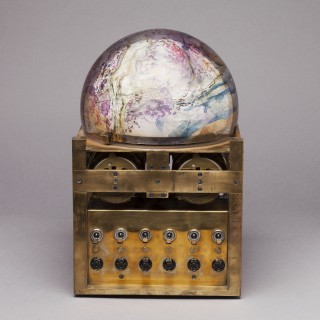 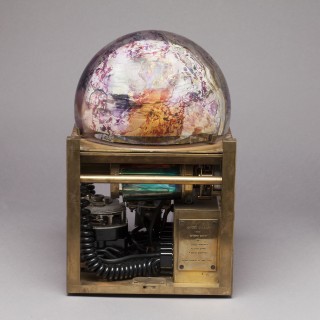 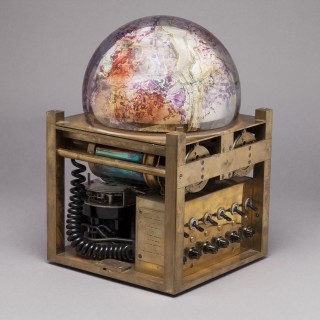 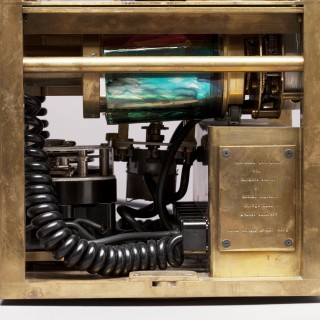 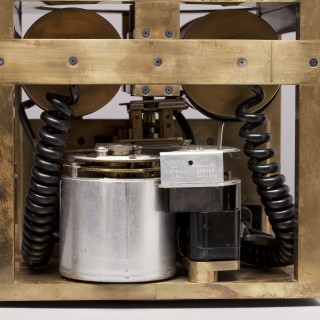 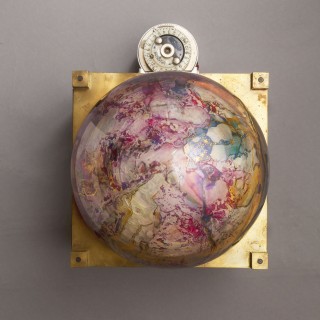 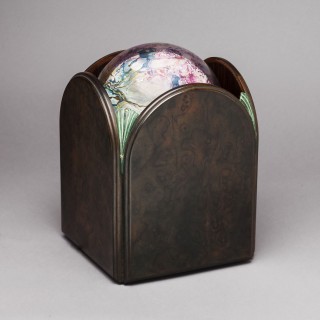 The timepiece is designed to capture the passing of time through the expression of never ending shifts and change of light. The concentric dome dial elements incorporate subtle ‘hands’ which allow the time to be read against gold star markers applied to the bronze ‘clasps’ set into the angles of the case with the twelve o’clock position being denoted by two gold stars in contrast to the other three which each have a single star. The twin light sources are contained within the revolving glass cylinders, each of which is coloured to simulate night to one half of its circumference and day to the other. Each cylinder is programmed to revolve through 180 degrees at dawn and dusk causing the light to change reflecting the passing of night into day and vice-versa.

The movement with substantial posted brass chassis enclosing a Horstmann Y-MK2 calendar time-switch set beside a rectangular brass control box incorporating six toggle switches and related fuse holders, the centre with an electric motor driving geared motionwork for the hours and minutes flanked by twin horizontal revolving cylinders of coloured glass each enclosing a light source and independently driven by electric motors connected to the control box, the top plate with circular aperture beneath two revolving concentric domes, the inner geared to revolve every hour and made from translucent textured porcelain with overall uneven polychrome colouring incorporating a deep purple line serving as a minute hand, the outer revolving once every twelve hours and finished with marbled polychrome decoration incorporating a gilt fissure design as the hour hand, the whole contained within a caddy-moulded stained burr walnut four-sided brass-framed sleeve cover with each side panel formed as an arch with cast patinatted bronze fan’clasp’ inserts applied with gold stars indicating the quarters to the angles, the control box applied with brass plate inscribed:

The benefactor of this clock, Raymond Montague Burton, was born in Leeds on 3rd November 1917 and educated at Clifton College. He went on to study at Trinity College, Cambridge and later at Harvard. During the war he was commissioned in the Royal Artillery serving in India and Ceylon and rising to the rank of Major. In the last phase of his business career he served as joint chairman and president of Burton which continued to expand with acquisitions of fashion brands such as Evans and Dorothy Perkins and eventually, after the family withdrew from hands-on management, became part of the Arcadia group.

In 1981 Burton retired to concentrate on philanthropic activities which took many forms both in Yorkshire, where he made his home and established a model farm, and further afield in projects such as the founding of the Shaarei Shalom Synagogue in St. Petersburg.

His support for York University included a long-standing sponsorship of its concert series and culminated in the opening in 2003 of the Raymond Burton Library for Humanities Research (though he was characteristically reluctant to see his name attached), which received his own scholarly collection of Yorkshire related books, manuscripts and playbills from the 18th and 19th centuries. He also contributed to the York Civic Trust, the Company of the Staple (a York based livery guild which he helped to re-establish), the “Kew at Castle Howard” Arboretum project and the Ryedale music festival which at his request and under his sponsorship staged a spectacular performance of Beethoven’s Ninth symphony in York Minster to celebrate the Queen’s Golden Jubilee in 2002.

A man of great vitality and wide-ranging enthusiasms, he collected silver and fine furniture and was a lifelong car enthusiast, having enjoyed international rallying with his brother Arnold in the 1950s; he owned Bentleys and Ferraris and declared himself pleased with a small MG in his sprightly mid-eighties.

Raymond Burton was appointed CBE for his charitable work in 1995 and died in 2011.