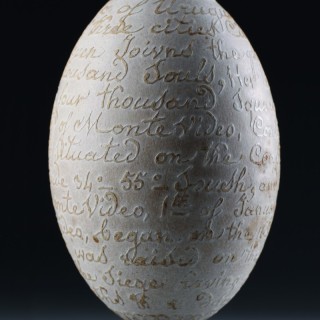 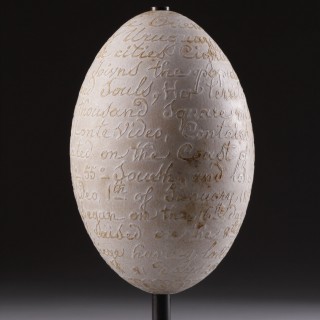 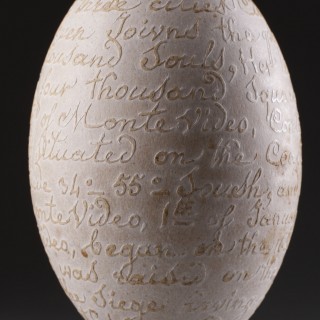 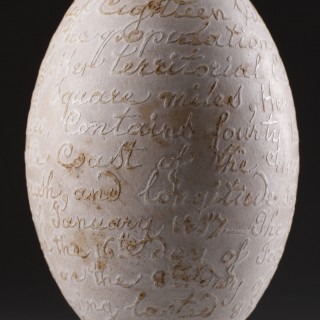 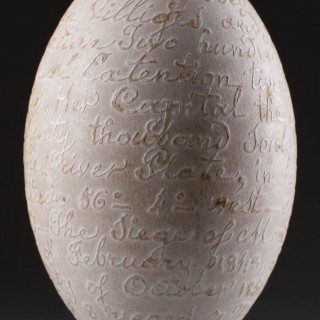 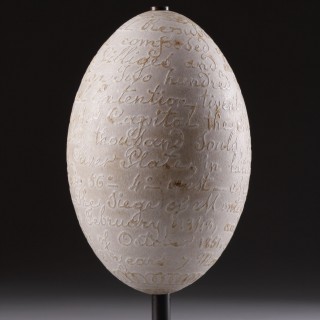 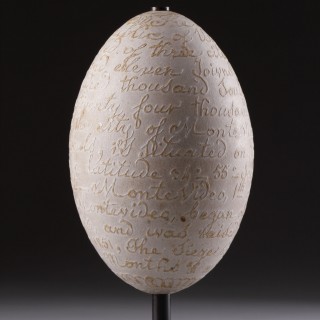 An Unusual and Curious South American Uruguayan Rhea Egg Carved with the Legend ‘The Oriental Republic of Uruguay is Composed of Three Cities Eighteen Villages and Eleven Toiwnes the Population Two Hundred Thousand Souls – her Territorial Extension Twenty Four Thousand Square Miles – her Capitol the City of Montevideo, Contains Forty Thousand Souls, its Situated on the Coast of the River Plate, in Latitude 34º – 55º – South, and Longitude 56º – 4º – West. Montevideo 11th January 1857. The Siege of Montevideo Began on the 6th Day of February 1843 and was Raised on the 8th Day of October 1851. The Siege Having Lasted 8 Years 7 Months and 21 Days’
19th Century

Rheas are the South American equivalents of the ostrich and are the heaviest of the New World birds. Although they have larger wings than other Ratites they are still unable to fly, but they are good swimmers and fast runners. Greater Rheas live in flocks of between 20 and 30 birds, male and female birds look much alike. They feed on plants, seeds and insects and some small animals. At breeding time the male bird displays and gathers together a harem of females. He then leads his mated females to a shallow nest which he has prepared and they all lay their eggs in one nest making a clutch of up to 18 eggs in total which the male then incubates.