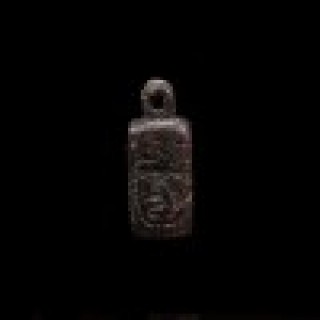 A bronze stamp seal of rectangular shape, from the Iron Age Kingdom of Urartu. The seal is decorated on all four sides and features the depiction of a winged quadruped on the base, and a loop for suspension to the top. The symbols engraved on the sides can be identified as a worshipper facing right with one arm raised, a scene with two creatures flanking a tree under a lunar crescent, a winged mythological creature and a tree of life, the meaning of which is still unknown and a much debated subject upon scholars. Despite details being a bit worn, this seal represents a rich and interesting hallmark of Near Eastern glyphic art. Similar seals, but in a cylinder shape, have been excavated at Karmir Blur and Toprakkale in Urartu, and at Igydr and Kelankran in the southern Caucasus, made there under Urar­tian influence.

Date: Circa 8th-7th century BC.

Fine, surface worn due to ageing. Light olive green patination inside some engravings.