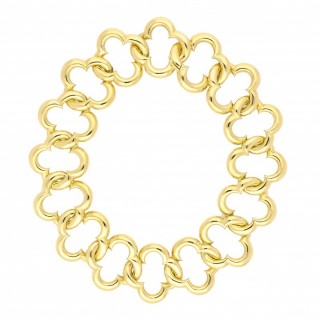 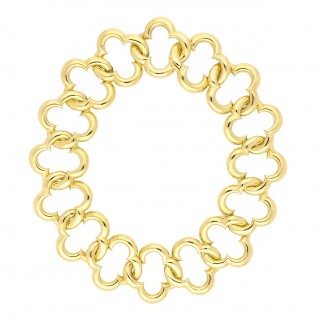 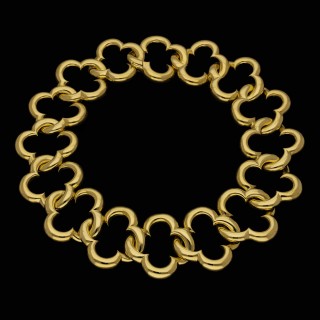 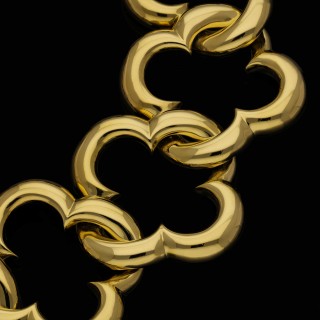 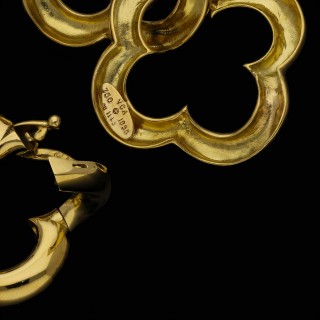 Description
A stylish Large 18ct yellow gold Alhambra necklace by Van Cleef & Arpels 1998, designed as a uniform, continuous row of interlinked quatrefoil openwork motifs in domed, highly polished 18ct yellow gold with a concealed clasp. The Alhambra collection was first created in 1968 inspired by the shape of a four-leaf-clover. This traditional and timeless symbol of luck has since been re-imagined many times over and forms the basis of an ever-evolving collection of jewellery. This necklace is a more unusual variation on the Alhambra theme with large open work links forming a shorter collar length necklace that sits around the base of the neck. It feels both classic and contemporary and is a versatile piece that could be worn both day and night, a chic and elegant jewel.

Directors Notes
The first Alhambra necklace was a long gold sautoir made in 1968 and influenced by shapes and patterns that Jacques Arpels noted on his travels. At the Doge’s Palace in Venice and the Alhambra in Grenada he saw repeated use of traditional quatrefoil motifs which called to mind the four-leaf clovers he loved to look for in his garden at home in France.

A great believer in lucky charms and talismans, Jacques would pick these ‘lucky’ four-leaf clovers to give to friends and colleagues so it seems unsurprising that this motif would work its way into the Maison’s jewellery sooner or later. The original gold necklace from 1968 was soon joined by brightly coloured versions inlaid with gem materials such as malachite, lapis, turquoise, carnelian, mother of pearl and onyx. These soon caught the attention of some of the most glamourous women of the time including Princess Grace of Monaco who was often photographed wearing multiple Alhambra necklaces layered together.

Since then, this traditional and timeless symbol of luck has been re-imagined many times over and the collection, which now includes rings, watches, bracelets, pendants and more, recently celebrated its 50th anniversary.