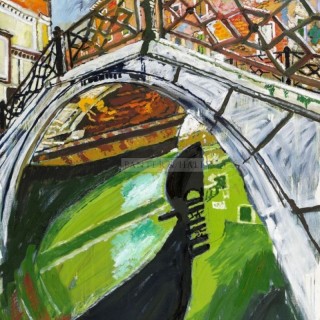 NB The frame is the artist’s original, a thin strip of plywood nailed to the outer edges of the canvas. Buyers may wish to reframe the work for a different domestic environment.

Born in Wimbledon, he studied art at Kingston College before completing his studies at the Royal College of Art in 1954. Bratby is considered the founder along with Derrick Greaves, Edward Middleditch and Jack Smith, of Britain’s 1950s kitchen sink realism movement. Decades in the public eye followed and his portraits of celebrities proved his main source of income for many years. After the demise of his first marriage to fellow Sade student and RA, Jean Cooke, he remarried to an actress, Patti Prime, and his subsequent work took on a bright, colourful exuberance. He represented Britian at the 1956 Venice Biennale where he won the Guggenheim Award. He was an important member of the ‘Kitchen Sink’ group of painters in the 1950s. He was know for his thick impasto oil paintings and his prolific portraits of the famous. His work can be found in the Tate Gallery and the NPG where a retrospective was held in 1991.