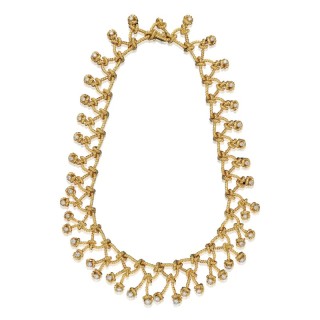 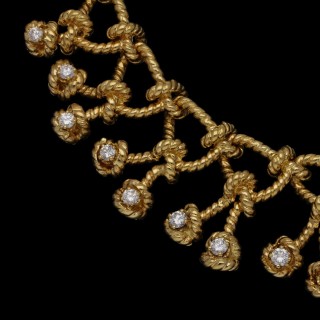 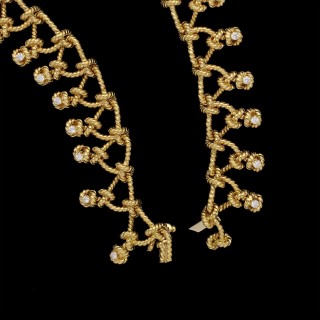 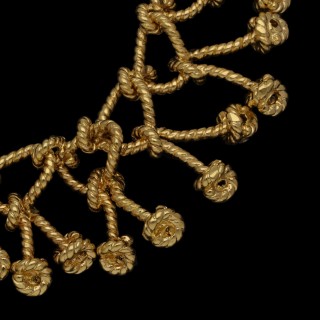 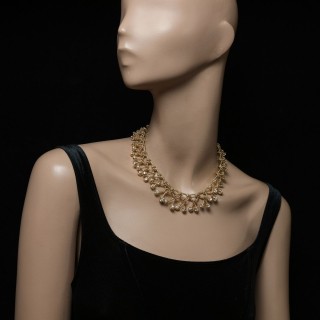 A beautiful gold and diamond ‘Regatta’ necklace by Verdura, c.1970s, the bib-style necklace of openwork design formed of 18ct yellow gold twisted rope work loop motifs each suspending either a single or double rope knot set to the end with a round brilliant cut diamond estimated to weigh around 4.2cts in total, to a concealed tongue and box clasp. This necklace was designed by Fulco di Verdura and was first made in the 1960s. Verdura grew up in Sicily and spent carefree summers at the beach where he would watch the fishermen sat mending their nets. He recalls many wonderful details of this time in his fascinating and highly enjoyable memoir ‘The Happy Summer Days’. Throughout his career as a designer, he found inspiration in the natural world, including the seaside, and these references appear regularly in his jewels. Pearls, shell shapes, actual seashells and rope-like textures and motifs are all evidenced in his work. On this topic, former Vogue editor Babs Simpson said “Fulco’s references to nature …. keep his work classic. But without question he was a revolutionary, the one who changed everything. Fulco made it all modern.” This lovely necklace with its nautically themed name has the casual chic air of the French Riviera where Verdura had spent time during his years living in France in the 1920s and 30s. Whether you pair it with a Breton top a la Coco Chanel, a crisp white shirt or a floaty summer dress, this necklace will add a touch of Fulco magic to your summer dressing.
Maker
Verdura
Period
Circa 1970s
Origin
America
Gemstones
42 x round brilliant cut diamonds estimated to weigh a combined total of approximately 4.2cts
Setting
18ct yellow gold signed Verdura
Weight
196 grams
Dimensions
15″ / 38cm lin length
1.7cm / 0.6″ wide at centre back, 2.7cm / 1″ wide at centre front
Condition
Very fine
Literature & Exhibitions
See p173 of Verdura – The Life and Work of a Master Jeweller by Patricia Corbet for a photo of this necklace design
Directors Notes
Few jewellers of the 20th Century could be seen as embodying the vibrant, colourful and glamourous life style of the jet-set in the way that Fulco di Verdura did. His jewellery was never produced on a large scale, most pieces were commissions for specific clients and he readily embraced the notion of bespoke, personal designs made to flatter the wearer. His pieces are highly sought after by today’s collectors and discerning jewellery lovers, as keen now as ever to adorn themselves with a piece of Verdura magic.