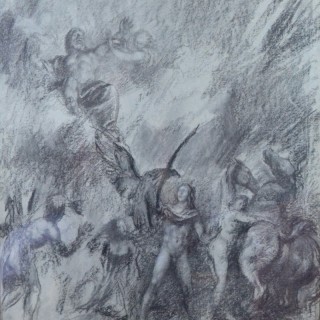 Signed and inscribed on a label on the backboard
Chalks
Framed

Victor Moody studied at Battersea Polytechnic of Arts and Crafts under Henry Cogle and later at the Royal College of Art from 1927 under William Rothenstein. In 1935 he was appointed Head of the Malvern School of Art and the family moved out of London, settling to Stroud. Heavily influenced by artists of the Baroque and Italian Renaissance art and techniques, Moody set upon a career as a painter of figurative subjects, classical scenes and portraits. Classical themes where prominent in his art and he spent many hours studying his subject in the British Museum and Victoria & Albert. He exhibited widely, including at the Royal Academy, New English Art Club, Goupil Gallery, Paris Salon and elsewhere.