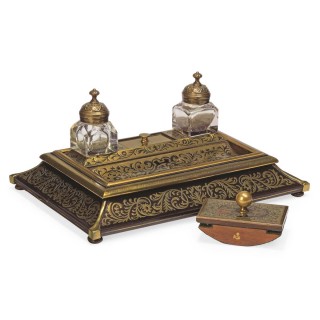 Victorian era inkstand with Boulle marquetry in ebony and brass

This 19th Century English inkstand directly references the Golden Age of French design, incorporating the ‘Boulle’ marquetry technique, named after the cabinetmaker to King Louis XIV of France, André-Charles Boulle. The inkstand is not only a finely crafted object of decorative art, but also serves a practical purpose and, owing to its inscription, is an interesting object of British social history.

The inkstand is of rectangular form with tapered edges, and makes use of both the ‘premiere partie’ and ‘contre partie’ Boulle marquetry techniques, to create scrolling arabesque decorations all over. The edges are decorated with ‘premiere partie’ marquetry, which is achieved through brass inlaid in ebony, and the upper surface of the inkstand is decorated with ‘contre partie’ marquetry, which involves ebony inlaid into brass. The top of the inkstand features two ink-pots of cut, faceted glass with brass lids, and a pen tray.

The inkstand is accompanied by a rosewood ink blotter, which is decorated with Boulle marquetry in tortoiseshell and brass, and was made later in the 19th Century by J. C. Vickery, a London-based firm. The blotter is stamped ‘JC VICKERY REGENT ST’ to the side.

The inkstand has an interesting engraving around its rim, reading ”Presented to P.G. John Carter by the Members of the Prince Albert Lodge No. 2235 North London District, Manchester Unity of Odd Fellows. In acknowledgement of valuable and disinterested services rendered to the Society & in testimony of their personal friendship & esteem for his integrity and consistent conduct as a useful working member Jan.1853″. The Oddfellows were a fraternal order, founded in Manchester at the beginning of the 19th century. At a time when there was no welfare state or NHS (national health service), the Oddfellows aim was to care for and protect their members and communities when they needed it. Notable members included King George IV and Sir Winston Churchill.

Victorian era inkstand with Boulle marquetry in ebony and brass