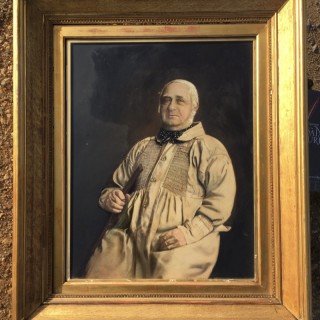 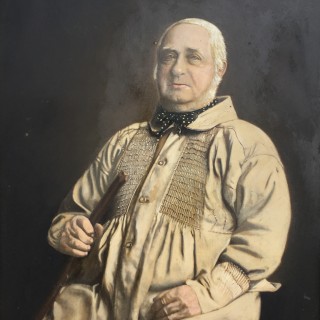 Victorian over painted photograph of a Warwickshire Farmer

Oil over a photographic base, on card and mounted onto original canvas
Framed

Paintings over a photographic base started to become popular in the latter part of the 19th century with some photographers and artists advertising themselves as artist-photographers. The photographer provided the prepared enlargement which was then painted over in oils by the artist. By the 1860s colour photographic enlargements could be produced. These were pasted on canvas, mounted on an artist’s stretcher, painted, varnished and, as in the present work, presented in an elaborate frame. Later it became possible to photo-sensitize the canvas surface upon which the portrait could be projected and fixed. Such portraits were normally of middle-class sitters and it is unusual to find such a splendid example of a rustic figure wearing his traditional smock.

Victorian over painted photograph of a Warwickshire Farmer