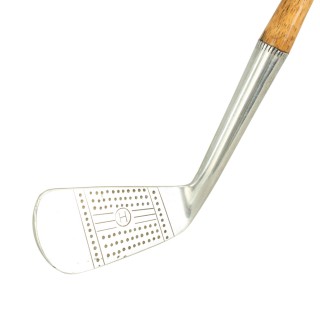 A very nice Walter Hagen mid iron golf club by Cochrane’s Ltd, Edinburgh. The irin with beautiful face markings with the H for Hagen in the center. The club is stamped Ladies mid Iron. The club with original hickory shaft and grip, all in excellent condition.

Cochrane’s Ltd., Edinburgh, was founded by J. P. Cochrane. In 1906 Cochrane was originally in the golf ball business but later entered the club market. He used the ‘Bowline Knot’ cleek mark as well as the ‘Knight and a monogram from 1915 until around 1939.

Walter Charles Hagen (1892 – 1969) was born in Rochester, New York, USA. He was a major figure in golf in the first half of the 20th century. He had a tally of 11 professional majors:
U.S. Open: 1914, 1919.
British Open: 1922, 1924, 1928,1929.
PGA Championship: 1921, 1924, 1925, 1926,1927.
Hagen totaled 45 PGA wins in his career, and was a six-time Ryder Cup captain.
Beginning as a caddy at the Country Club of Rochester Hagen developed his love of golf. He played golf at every opportunity and by his mid-teens was an expert player. He was hired by the club to work in the Pro Shop and to give lessons to club members.
He made his professional debut in 1912 at the Canadian Open aged 19, finishing in 11th place. Hagen’s other sporting love was baseball (at which he was very good) and canceled a tryout for the Philadelphia Phillies in order to play in a golf tournament. He won that tournament to become the U.S. Open Champion, and his career was changed forever.