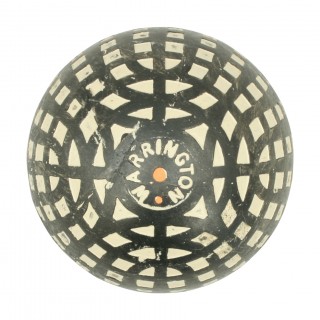 Unusual Mesh Pattern Golf Ball ‘Warrington’.
A very unusual patterned 1915’s rubber core golf ball in used condition. The patterned ball is a great display ball marked ‘Warrington’ on one pole and on the other ‘A.J.I. Sherwood’. This is a rather attractive golf ball with a few marks on its surface.

The rubber core ball (the ancestor of the modern ball) began its life in the late 1890’s. The first mass produced rubber core ball was by Coburn Haskell of Cleveland, Ohio. The first core balls were hand wound with elastic thread with a Gutta-percha cover, moulded with the raised square mesh pattern of their predecessor. The slight irregularities in the early wound balls made them quite lively, it was not until the invention of the automatic winding machine by John Gammeter (an engineer at Goodrich) and the change of pattern from mesh to bramble that the balls became more consistent and predictable. In later years, the 1920’s, the design went back to a mesh pattern with lattice design.