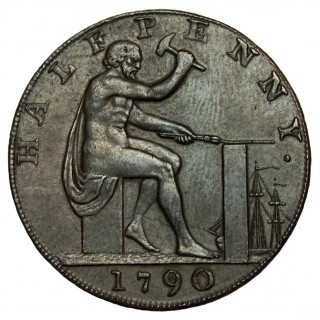 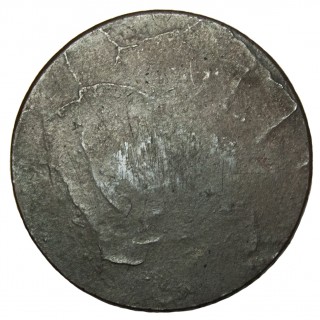 Great Britain, Warwickshire, John Wilkinson (1728-1808, an industrialist with interests in both iron and copper; he was successful in the development of a steam engine cylinder for the firm of Boulton & Watt in 1775, later issuing large quantities of tokens ostensibly to pay his employees), Uniface Copper Halfpenny, an impression of the reverse die, dated 1790, obverse: blank, reverse: figure of Vulcan seated (the god of fire, including volcanoes, metalworking and the forge in ancient Roman religion and myth, he is often depicted with a blacksmith’s hammer; his Greek counterpart is Hephaestus, the god of fire and smithery; he is the patron god of the English steel-making city of Sheffield, his statue sits on top of Sheffield Town Hall; a Vulcan statue, located in Birmingham, Alabama (USA), is the largest cast iron statue in the world), HALFPENNY above, date in exergue, Y of HALFPENNY just above the bar, stop just above the top pennant, edge PAYABLE AT MACCLESFIELD LIVERPOOL OR CONGLETON, diam. 29mm (Dalton & Hamer “The Provincial Token Coinage of the 18th Century” unlisted, noted as 430 bis).