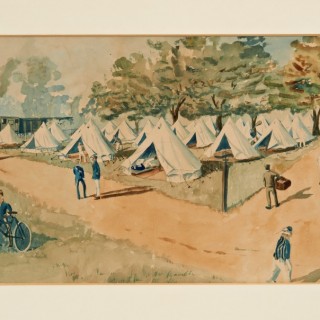 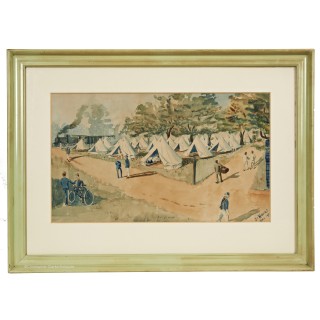 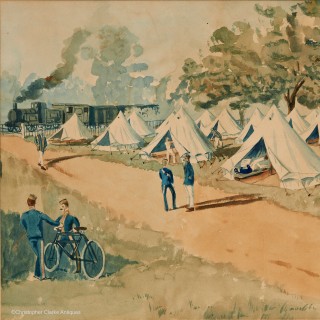 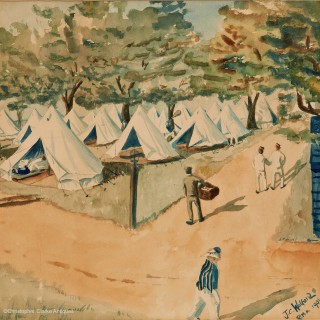 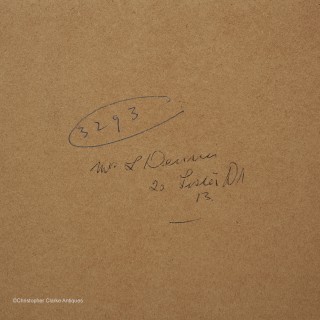 A large watercolour on paper painting of a military training camp, signed J.C. Walford RMA 1901 to the bottom right corner.

Given that John Colquhoun Walford was gazetted to the Royal Artillery as a 19 year old, 2nd Lieutenant on the 23rd of July 1901, the Royal Military Academy drawn is likely to be Woolwich. The scene shown is quite different to most of those of the Academy, which typically show the main grand building with parade ground to the front. The location of the painting is probably one of the many green spaces around the Academy: the Common, Barrack Field or Cadet’s Practise Ground. There is clearly a steam train beyond the railings and the area looks to be on a slope.

A number of bell tents are set up in rows, each containing a bed with several soldiers going about their business. One is lying on his bed reading a newspaper, others are chatting and smoking pipes, one has a bicycle, all are relaxed.

Walford became a Lieutenant in 1904 and Captain in 1914. He was awarded the DSO for gallant conduct at Eloges and 2 days later at Le Cateau, in the same year, whilst with the 114th Battery. After being wounded twice, he still brought up limbers and teams under heavy fire. In 1915 he became a Major and was Brigade Major RA of the 63rd Division in France between 1917 and 1918. Following that he became an Acting Lieutenant-Colonel of the Royal Artillery.

The painting is clearly an amateur’s work but it is a good size, the scene is interesting and shows the cadets in their down time at the Academy. The painting is mounted and in a green frame. The card to the back of the picture looks to have ‘Mrs L. Dennis, 20 Lister Dr. 13’ written in pencil. Dated 1901.

Framed Size is given.