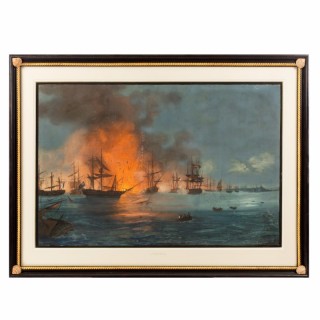 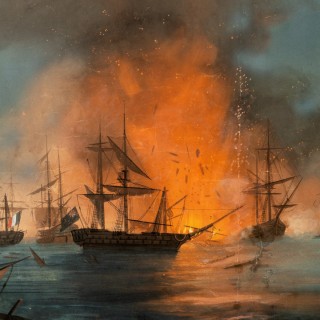 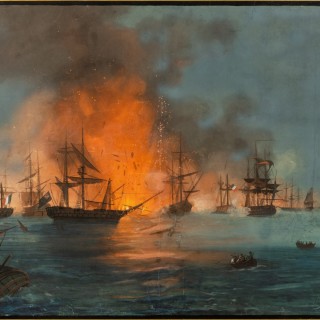 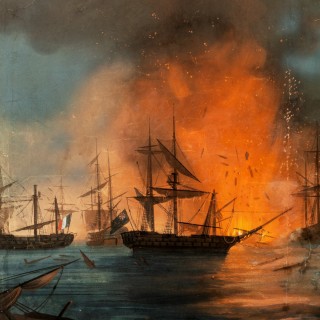 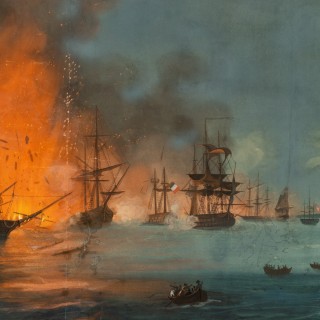 Watercolour of the Battle of the Nile

Reports of Admiral Sir Horatio Nelson’s crushing victory over the French fleet at the mouth of the Nile on 1/2 August 1798 reached Naples on 4 September, a month before the news was received in London. This view of the battle shows the cataclysmic climax of the action when the French flagship L’Orient exploded. The detonation is treated in a similar way to the many views of the eruption of Vesuvius produced by Neapolitan artists such as Camillo de Vito and Pietro Fabris for wealthy Grand Tourists and for residents like British Ambassador Sir William Hamilton. The size of the painting, unusually large for its medium, indicates a commission or gift.

Nelson evacuated the Neapolitan Royal Family from Naples in December 1798 following an uprising and revolt by Jacobin sympathisers aided by the French. The violent circumstances of the King of Naples’ restoration in 1799 implicated Nelson in war crimes and cast the Admiral as a villain in Italian popular culture to this day. For this reason, depictions of Nelson’s victory in Neapolitan art are very rare.

Watercolour of the Battle of the Nile