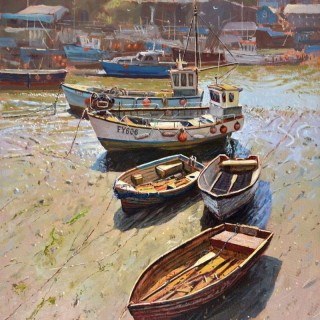 A realistic style modern painting of boats at Cornwall’s Mevagissey harbour, during tide out, painted by the well-known wildlife and marine artist Tony Forrest. The piece is signed by the artist and is presented in a contemporary white frame.

Tony Forrest (born 1961) has been a professional artist for over 30 years chiefly painting African wildlife. During his career he has travelled the world, going to many areas of the African continent and also many places in America dealing with prestigious galleries in Florida and Safari Club International in Nevada where many wealthy wildlife art buyers gather each year.

During the late 1990s Tony was asked by the British Army Air Corps to paint their helicopters in both Germany and Bosnia shortly after the conflict there ended. He was flown to Bosnia and spent a week with the AAC photographing and painting Lynx and Gazelle helicopters. He made several oil paintings from life and was featured on a British Forces TV news programme.

Tony Forrest’s life long passion has been wildlife conservation. He has given several paintings to wildlife charities including the Born Free Foundation (raising £4,000), the Tusk Trust raising over £10,800 in a single auction, Africa in Namibia and others. In more recent times Tony visits Africa with professional photographers and safari guides where he can be assured of excellent game sightings – especially the big cats and elephants.

Tony’s inspiration comes mainly from the light in the landscape and the way sunlight falls on the animals he paints. A leopard sitting in dappled light is an all-time favourite. First visiting Africa in 1990, he has been going back there ever since every two to three years to collect fresh material. His original paintings can fetch up to £16,000 for the larger canvases and they sell quickly from the galleries. One show in Birmingham’s Halcyon Gallery was sold out in four hours early in Tony’s career.

Tony Forrest has been living in Cornwall for 16 years. Painting wildlife almost exclusively has meant that the beauty of his own home county has eluded him – until recently. In 2008 he began to explore the scenery and fishing harbours near his home in Cornwall and had work exhibited in a prestigious National Trust gallery. It only took two weeks for all seven paintings of Mevagissey and Mousehole to be sold and since then Tony has been exploring the wonders of the Cornish landscape and harbours. Right from the start his main inspiration was the light but, unlike Africa, there was now the opportunity to play with light on water, wet sand and old boats.

Tony has never tired of capturing the magical light in Cornwall, be it Mevagissey, Mousehole, St.Ives or anywhere else. Technicalities are of less importance to Tony; he is more interested in the atmosphere of the place and the visual excitement of the moment. Painting exclusively in oils, Tony loves the richness and juiciness of the paint and the best quality pigments afford him the colour and depth that he craves.