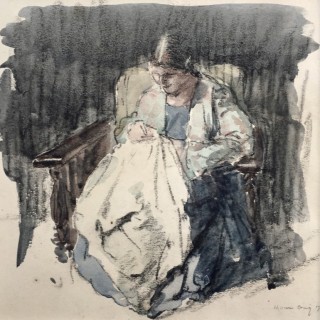 Signed and dated 1928
Watercolour and chalk
Unframed, in mount only

Dennis William Dring was born in London and studied at the Slade under Henry Tonks, 1922-25, where he won a first prize for drawing and figure painting. He was a teacher of drawing and painting at Southampton School of Art until 1940, then becoming an Official War Artist whose work is well represented in the Imperial War Museum. After the war he became a noted exhibitor at the Royal Academy, becoming a full member in 1955. He lived at Compton, Near Winchester, Hampshire.

The sitter is Grace Elizabeth Rothwell, a painter and fellow Slade student who became Dring’s wife in 1931. Under the name of Elizabeth Rothwell she showed at the New English Art Club and Royal Academy of Arts during the 1920s and early 30s but after the birth of their children she largely gave up painting and reverted to textile design. Examples of her textile work are in the collection of the Victoria & Albert Museum, London.