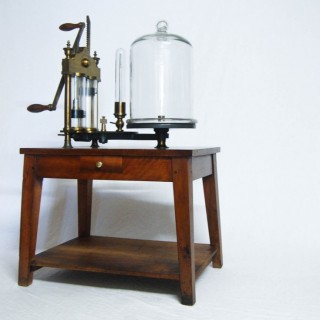 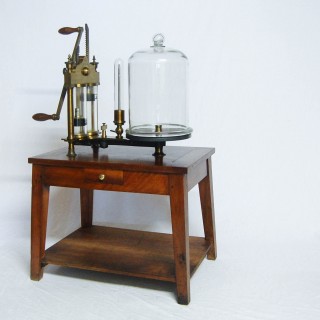 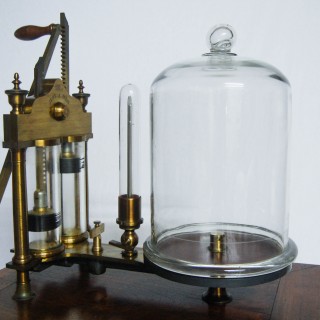 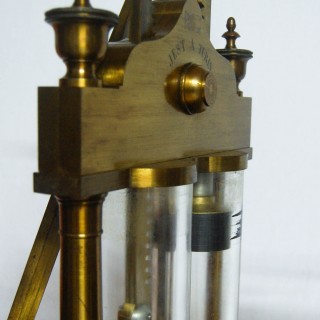 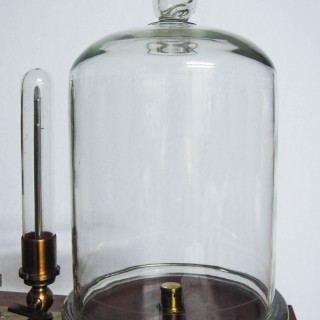 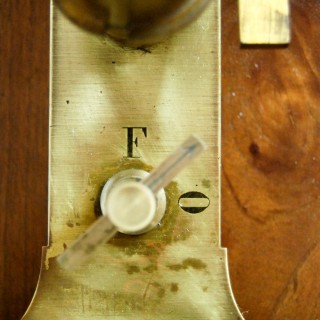 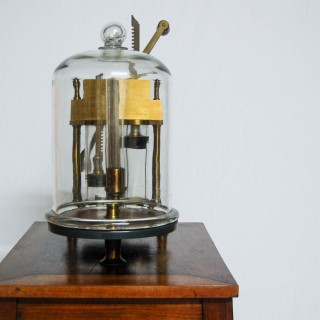 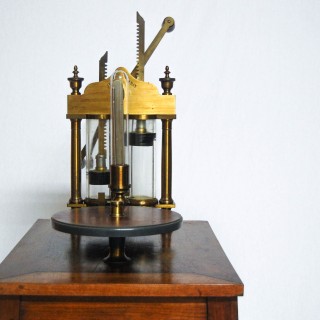 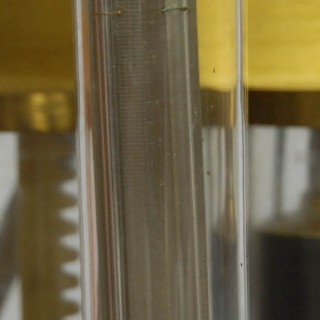 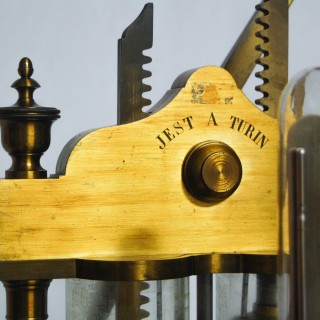 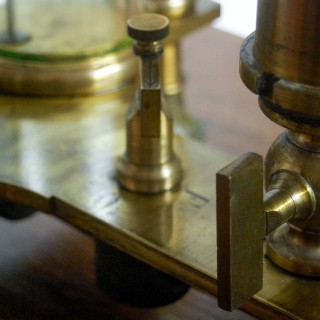 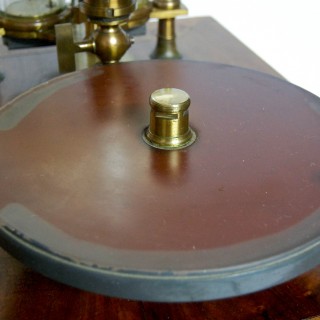 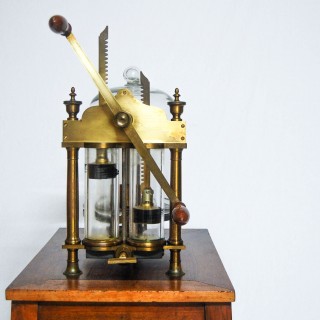 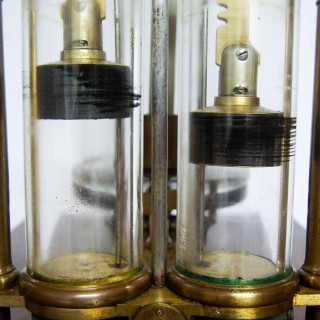 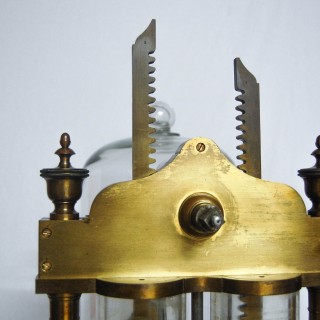 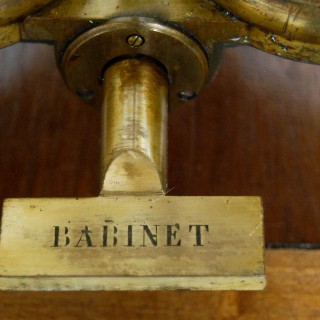 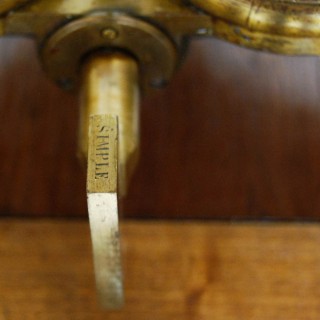 This superior scientific instrument is constructed out of solid brass with a double ratchet mechanism controlled by means of a brass crank with wooden handles to either side. The mechanism controls two original glass cylinders each containing a silk and oil soaked piston head to allow the removal of air and the creation of the vacuum. Each piston has a wire passing through the head which lifts the valves at the base, developed to allow them to be lifted independently from the air remaining in the receiving bell jar and thus creating a greater vacuum effect. The pistons are connected by a metal tube running on the underside of the instrument to the glass vacuum plate on which sits its original bell jar (the receiver). The plate also has a brass threaded connecting end, on which numerous other apparatus could be attached for the purposes of further experimentation.

The Belli-Babinet tap (stamped to Babinet at the piston end) was a further improvement added by Jest. Developed from independent experiments by Italian physicist Guiseppe Belli and French physicist Jacques Babinet in the late 1820’s, it allowed for greater expulsion of the air remaining in the piston barrels once the vacuum had been formed in the receiver.

In order to monitor the extent of the vacuum created in the bell jar, the pump is also fitted with a manometer between the piston end and the receiver. Working under the same principals as a barometer, the reading on the gauge will reduce as the vacuum becomes greater.

The instrument is screwed onto its original walnut table which has an integral drawer containing numerous spanners. These comply with the different parts of the pump and allow for disassembly if required.

The Jest family were eminent makers of scientific instruments in Turin, Italy for most of the nineteenth century. Founded by Enrico Federico Jest, (born in 1778 in Couvet, Switzerland), Jest according to his 1811 marriage certificate had already been resident in Turin for six years (since 1805) and by 1814 was listed as the instrument maker to the University of Turin, a position that the family would keep until the company ceased to trade at the end of the century. Subsequently, his son Carlo took over the role followed by his cousin Constante and finally Charles Jest until his death in 1900.

During this time, the company obtained a bronze medal at the Italian States Exhibition of 1829, in 1844 they received several awards at the Italian Royal Chamber of Agriculture’s industry and Fine Arts Exhibition, a gold medal at the Geneva Industrial Exhibition of 1853 and also at the London Exhibition of 1862 where Carlo Jest is listed as showing “a collection of philosophical instruments for schools”. He was noted to have received an award for “economical construction and good workmanship in his philosophical instruments”.

Enrico Federico Jest is perhaps most famous for having been one of the first people to have introduced daguerreotype photography to Italy. Relying on descriptions of a speech made at The Academy of Science in Paris in 1839, Jest in October of that year had built and demonstrated (in front of the Grand Duke of Tuscany) apparatus for producing daguerreotype photographs. The firm maintained a keen interest in photography and according to their advertisements, were producing photographs for the general public as early as 1842.

In the 1850’s the Jest family were also responsible for the first public experiments of electric light in Italy whereby the monument to Conte Verde in the Palazzo Madama, Turin was illuminated from a nearby balcony.

Jest were also early adopters of the aneroid barometer with adverts from 1847 espousing the accuracy of the new inventions of Lucien Vidi in 1843. These early barometers were produced by Dent in the UK and are now some of the most collectible examples.

History of the Vacuum Pump

Vacuum pumps were first conceived in the seventeenth century by the German scientist Otto Von Guericke who conducted the famous Magdeburg Spheres experiment whereby two connected hemispheres with evacuated air withheld the force of two horses attempting to pull them apart. In the same century, Robert Boyle with the assistance of Robert Hooke devised improvements on Guericke’s work and produced the “machina Boyleana” which was a single barrelled air pump. An account of this work was published in 1660 under the title “New Experiments Physico-Mechanicall, Touching the Spring of the Air, and its Effects”. Further improvements were made by Denis Papin using two barrels and self-closing valves.

The double barrelled air pump as we now know it was first constructed by Francis Hauksbee (or Hawksbee) and shown to The Royal Society in 1705. Smaller table top versions were later developed by Benjamin Harris and his book on the subject (which is perhaps more of an advert for his products), provides some interesting insight into the types of experiments being suggested for those wishing to conduct home experiments with his apparatus. Given the success and compactness of Harris’s version compared to Hauksbee’s earlier model, it seems to have created the mould for most later models and the vacuum pump remained somewhat similar in style throughout the nineteenth century.

Scientific instruments by Jest are rarely seen outside of public institutions and museums today owing to the quality of the workmanship and engineering of their manufacturing output. Perhaps less widely known in the UK, the company of Jest was however selling to both UK and continental markets given their attendance at the exhibitions mentioned above. This vacuum pump with its original walnut table base is somewhat different to UK examples given the fashion for using glass to create the piston cylinders with all UK examples being encountered with brass cylinders which does not allow access to see the movement.

All in all, a magnificent example of a nineteenth century demonstration vacuum pump.

Very good. It retains its lacquered finish with all glass work intact. The existence of its original table is a very scarce feature