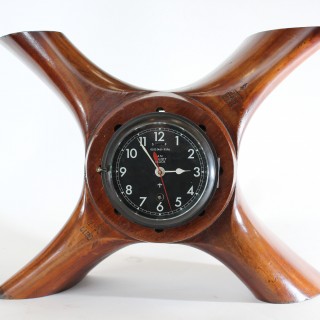 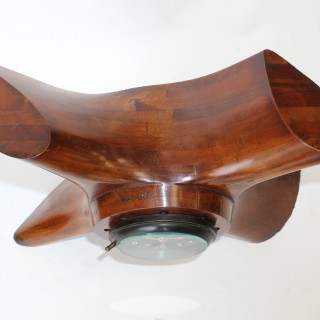 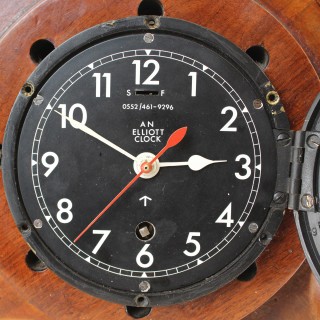 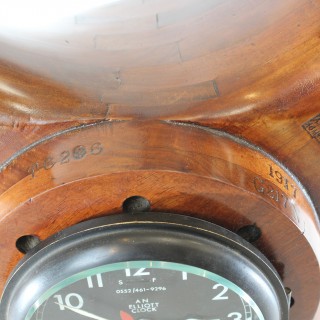 An original First World War 4-blade truncated propeller constructed out of strips of walnut & mahogany, and finished to a high polish. It would have been fitted to a Royal Airforce Factory RE8 reconnaissance light bomber biplane commissioned in 1917, powered by a RAF 4A 12-cylinder 140HP air cooled engine.

It is now fitted with an English-made 6-inch diameter bulkhead clock, which was also military (Royal Navy), as denoted by the broad ordnance arrow and the pattern number 0552/461-9296, both painted on the black dial. The clock was allegedly originally from a submarine.
It has a key-wound 8-day movement, with red centre seconds hand and a Slow / Fast regulation slot below the 12.

The clockmakers, F.W. Elliott Ltd. began in 1923 in Croydon. They started to produce clocks for the armed forces when war was declared in 1939, together with test gear and apparatus for the Rolls Royce engines used in the RAF planes. The factory was hit by incendiary bombs in 1943 on two occasions but production was not seriously affected. The company continued making fine quality clocks until the late years of the 20th century.

The clock is overhauled and guaranteed for 3 years.