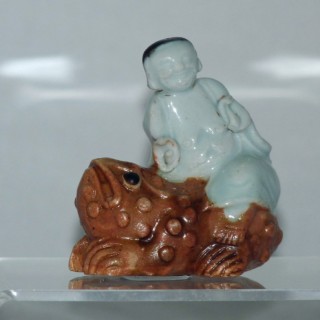 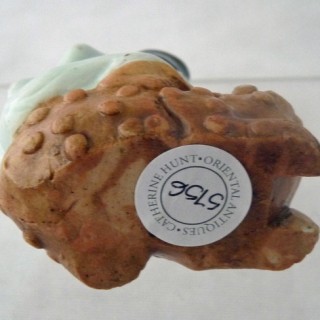 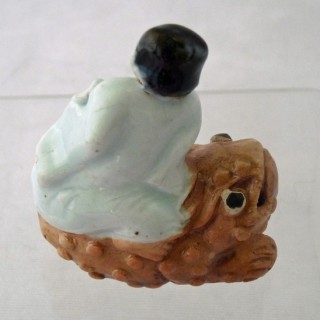 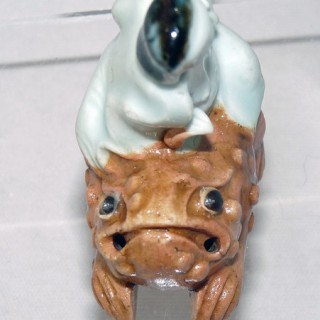 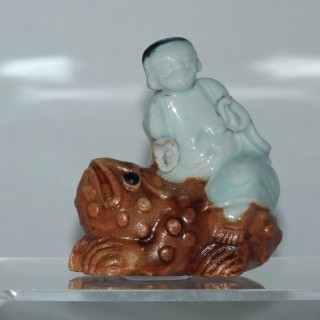 Late Yongzheng to Early Qianlong biscuit porcelain water dropper modelled as a reclining Liu Hai who is sitting on his three legged toad Excellent modelling and glaze.The piece was made as a water dropper for the scholar’s table although some were brought into Europe as ‘a novelty’ where hey proved popular. This piece was probably used on the scholar’s table rather than being an export piece as it is an earlier piece than when the export started.
Liu Hai was said to have magical powers and to be able to travel anywhere in the universe with his companion the three legged toad whom he had tamed. The two were supposed to be able to collect money from the sea and which he then gave to the poor and needy and by playing with coins he was able to distract his toad from releasing poison and thereby preventing people from being harmed.
Biscuit porcelain was dry fired ( with out glaze), then the paint and enamels were applied to the body and fired again. Biscuit porcelain means that it saved on glaze although two firings were still needed.
This is such a great piece.
Excellent bright colouring and detail

overall good slight loss of glaze to the one eye of the toad at the rear of the piece.