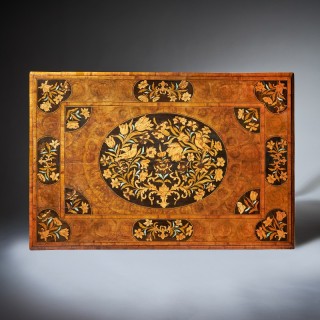 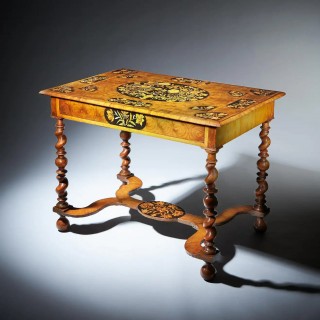 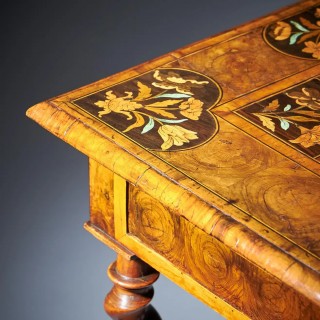 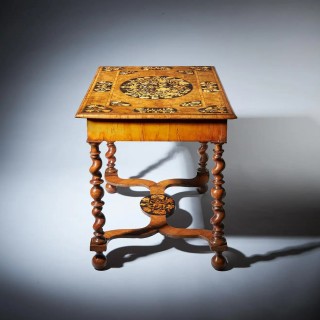 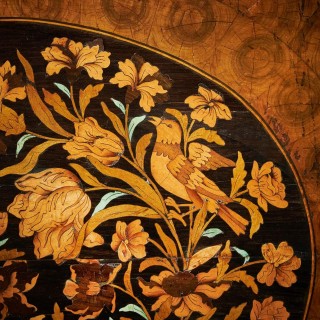 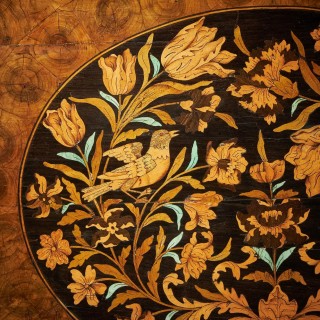 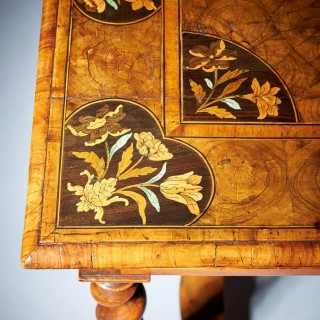 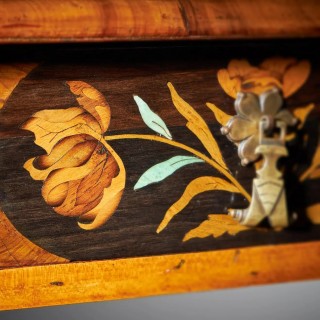 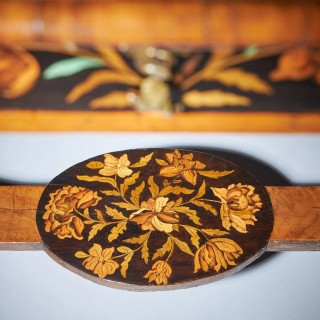 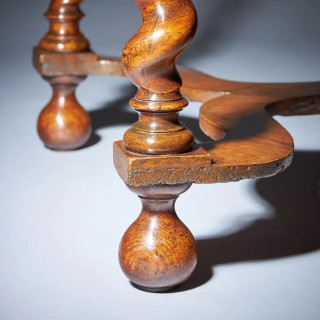 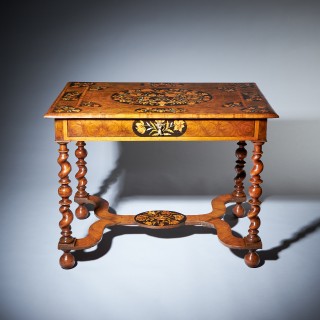 The attribution to Jensen derives from a group of floral marquetry furniture attributed to the cabinet maker, however, there is one table in particular held at Ham house that relates to this table more than any other. See images.

Jensen was almost certainly of Dutch origin and was known to be working in London from 1677 and at premises in St. Martin’s Lane by 1680 where he was described as a pre-eminent ‘Cabinet maker and Glasse seller’. Jensen was able to buy his way into the Joiners Company in 1667, probably at significant expense, thus proving his belief in his work and his establishment in London. From the early 1680s, he was the accredited cabinet maker to the Royal Household where several of his pieces remain, including a cushion frame mirror (RCIN 1383). A very similar mirror, almost certainly by Jensen, hangs at Ham House, Richmond, here three side tables, a strong box on stand and a cabinet are attributed on the basis In 1670s London, floral marquetry was a novelty, Reinier Baarsen suggests that it was this speciality work with which Jensen conquered the London clientele a few years later. Assuming his Dutch roots are accurate Jensen would have brought the art of floral marquetry with him from Holland to London, possibly via Paris after studying the work of the Frenchman Cornelius Gole, following Pierre Gole (c.1620-1685) in Paris and Leonardo van der Vinne (active c.1659-1713) in Florence.

In style, Jensen’s furniture is consistently French in form, and particularly close to the work of Pierre Golle, Boulle’s famous predecessor. Golle’s will mentions a sum of money owed to Jensen for glue suggesting that close contact existed between the two masters. The catalyst here may well have been Golle’s brother-in-law, Daniel Marot, the Huguenot designer and engraver trained under Bérain, who left France before the Revocation of the Edict of Nantes, entering the service of William and Mary first in Holland and then in England. Marot’s engraved furniture designs show remarkable similarities with Jensen’s documented pieces in the Royal Collection, and others attributed to him at Boughton, Drayton and elsewhere. It is possible that Jensen had French craftsmen working for him: for instance, one Peter Berew, who signs a receipt on his behalf at Drayton in 1693. French terms, barely anglicized, occur constantly in the accounts, and indeed the ‘beuro’ or ‘scrutore’ (escritoire) with ‘drawers to stand on the top’ (otherwise known as the ‘caddinet’) may be a form which Jensen introduced to this country from France, together with the narrow gateleg table with a folding top.

Gerrit Jensen was one of the foremost cabinet-makers of his day and worked in London from his premises in St. Martin’s Lane. Jensen served the English crown since the reign of Charles II as the accounts of the Royal Household record a payment to him in 1680, for furniture which King Charles II commissioned as a royal gift for the King of Morocco. In 1689, Jensen was appointed royal cabinetmaker to King William III and Queen Mary – ‘Cabinet maker in Ordinary’ to the Crown; and he retained his royal appointment throughout the reign of Queen Anne, supplying furniture for St. James’s Palace, Hampton Court and Kensington Palace. In addition to the Royal family and the Dukes of Devonshire, Jensen also attracted commissions from senior members of the nobility, including the Dukes of Richmond, Hamilton, Montagu and Somerset, collaborating with other leading artists and craftsmen on the decoration of some of the greatest town and country houses in England. Jensen was one of several artist-craftsmen of foreign background employed at the English court, and his work shows a strong Continental influence, reflecting the fashionable French court styles of Pierre Golle, André Charles Boulle and Daniel Marot earning him the title ‘the English Boulle’.