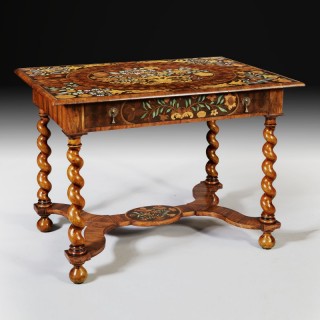 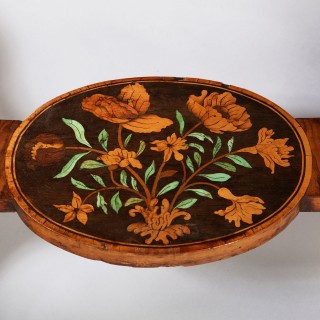 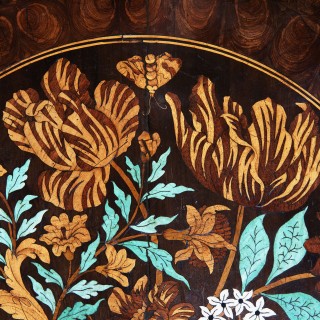 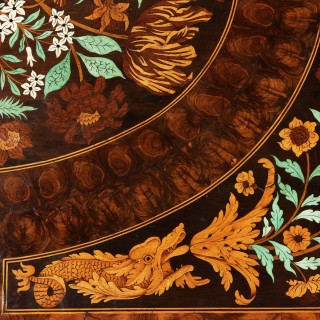 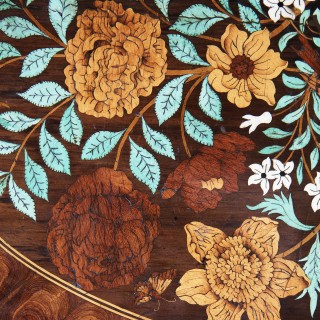 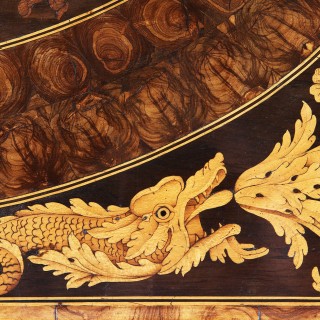 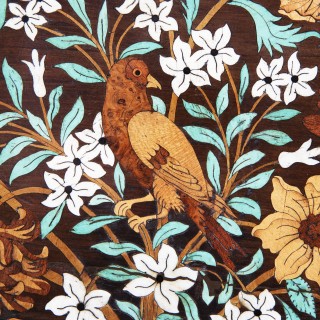 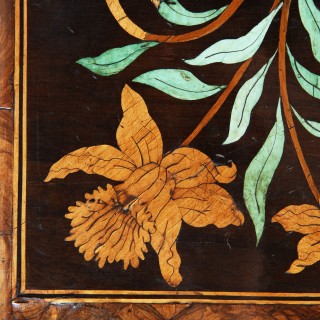 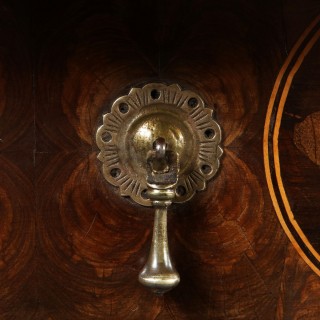 This accomplished Charles II marquetry table clearly bears the influence of Dutch and French masters of marquetry working in the last quarter of the 17th century, such as, Gerrit Jensen, Pierre Golle and Jan Van Meekeren. Golle, a Dutchman who moved to Paris to work for the court was at the forefront of richly inlaid designs of floral motifs and renowned for his marquetry of brass and tortoiseshell, made famous by his son-in-law André Charles Boulle. Golle’s son, Cornelius, emigrated after the Revocation of the Edict of Nantes (1685) and by 1689 was working with the London cabinetmaker Gerrit Jensen, supplying marquetry furniture in the latest Parisian taste to the court of William III and Mary II and Queen Anne.

In style, Jensen’s furniture is consistently French in form, and particularly close to the work of Pierre Golle, Boulle’s famous predecessor. Golle’s will mentions a sum of money owed to Jensen for glue suggesting that close contact existed between the two masters. The catalyst here may well have been Golle’s brother-in-law, Daniel Marot, the Huguenot designer and engraver trained under Bérain, who left France before the Revocation of the Edict of Nantes, entering the service of William and Mary first in Holland and then in England. Marot’s engraved furniture designs show remarkable similarities with Jensen’s documented pieces in the Royal Collection, and others attributed to him at Boughton, Drayton and elsewhere. It is possible that Jensen had French craftsmen working for him: for instance, one Peter Berew, who signs a receipt on his behalf at Drayton in 1693. French terms, barely anglicized, occur constantly in the accounts, and indeed the ‘beuro’ or ‘scrutore’ (escritoire) with ‘drawers to stand on the top’ (otherwise known as the ‘caddinet’) may be a form which Jensen introduced to this country from France, together with the narrow gateleg table with a folding top. Gerrit Jensen was one of the foremost cabinet-makers of his day and worked in London from his premises in St. Martin’s Lane. Jensen served the English crown since the reign of Charles II as the accounts of the Royal Household record a payment to him in 1680, for furniture which King Charles II commissioned as a royal gift for the King of Morocco. In 1689, Jensen was appointed royal cabinetmaker to King William III and Queen Mary – ‘Cabinet maker in Ordinary’ to the Crown; and he retained his royal appointment throughout the reign of Queen Anne, supplying furniture for St. James’s Palace, Hampton Court, and Kensington Palace. In addition to the Royal family and the Dukes of Devonshire, Jensen also attracted commissions from senior members of the nobility, including the Dukes of Richmond, Hamilton, Montagu, and Somerset, collaborating with other leading artists and craftsmen on the decoration of some of the greatest town and country houses in England. Jensen was one of several artist-craftsmen of foreign background employed at the English court, and his work shows a strong Continental influence, reflecting the fashionable French court styles of Pierre Golle, André Charles Boulle and Daniel Marot earning him the title ‘the English Boulle’. Further stylistic and circumstantial evidence supporting the attribution to Gerrit Jensen in association with Pierre Golle, is in part from a number of tables with attribution to Jensen at Ham House, Chatsworth and Beningbrough Hall, an olive oyster cabinet on chest from Chatsworth House, a cushion mirror in the Boston Museum of Art, a further cushion mirror at Ham House, a cabinet in the Rijksmuseum, an unattributed table in the V&A and a cabinet from Levens Hall. We also take a brief look at other collaborations and possibilities in the royal collection. It should be noted like our example all legs to the aforementioned tables and the cabinet from Levens Hall, along with a table possibly commissioned by Charles II in the royal collection, share the distinctive barley or Solomonic twists, with decoration to the stretchers, excluding the example at Beningbrough Hall, which is on broken scroll legs and a table at Chatsworth House, which has broken S-scroll legs into carved gilt mask capitals, raised on carved gilt feet. The construction and use of materials on our table are plausibly ‘identical’ to that of the tables we have studied excluding that at the royal collection, as it does not have a drawer.