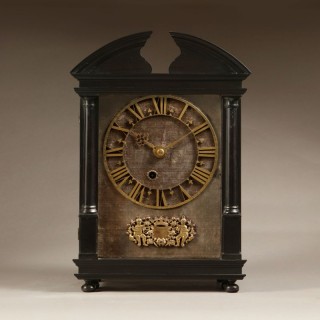 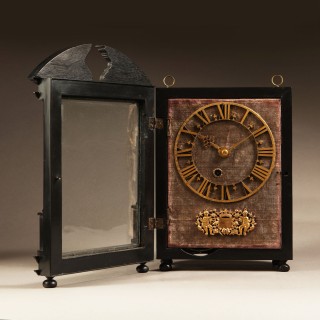 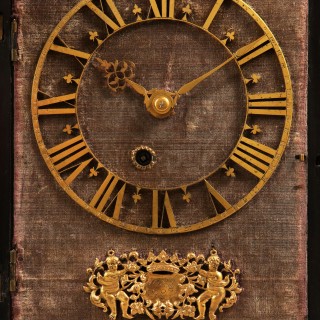 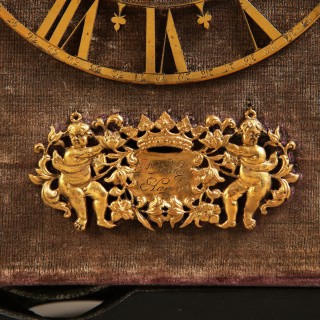 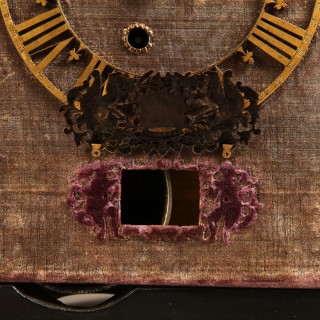 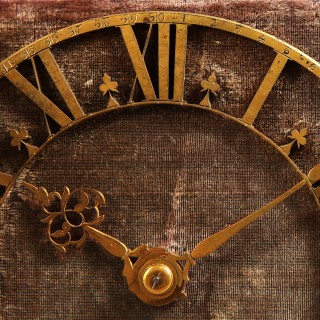 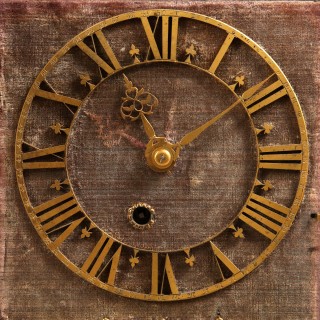 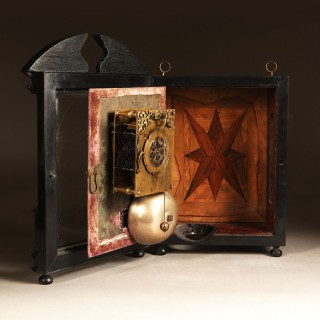 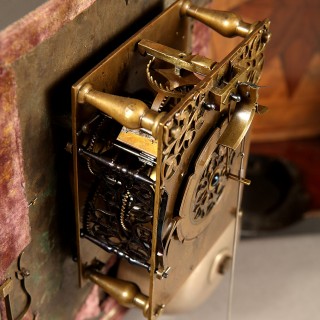 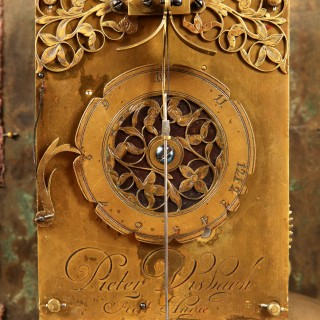 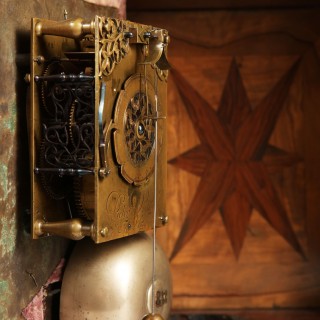 Unusually small Hague clock made c. 1675 by Pieter Visbagh, who was apprenticed by Salomon Coster. The latter made the first pendulum clock according to the instructions of Christiaan Huygens, the internationally renowned scientist who developed the idea of applying a pendulum to a clock movement.

The delicate ebony-veneered case has a moulded broken arch pediment, whilst the door is flanked by plain half round Doric capital-capped columns on high bases. A traditional star adorns the internal face of the case surrounded by well-chosen cuts of olive in a parquetry fashion. This design of star was also popular in England around this time and was almost certainly introduce by the Huguenots.

The two-day movement is driven by a compact single barrel. The going train has its original verge escapement with a silk suspended pendulum between cycloidal cheeks, also a design by Huygens to improve the trajectory of the pendulum bob. The sides of the backcock are richly pierced and engraved. The striking train is regulated by an external pierced countwheel with a blued steel backing on the backplate to create a lovely contrast; the last hour struck is indicated by Arabic numerals. The striking, which has elaborately pierced striking gates, sounds the hours on a bell inside the case, which has a sound fret in the bottom. The backplate is signed at the bottom by the maker: Pieter Visbagh Fecit Haghe.

The velvet-covered brass dial is hinged on the left hand side, giving access to the movement, which has an almost bronze-like patina caused by age. It has a fine skeletonised gilt-brass Roman chaptering with half hour and Arabic minute divisions. The time is indicated by a fine pair of original gilt brass hands, the hour hand delicately pierced. Below is a shaped and chased signature cartouche, consisting of a crowned coat of arms held by two putti. It bears the maker’s name: P. Visbag Haghe. It is hinged at the top and upon lifting a rectangular hole is revealed through which the pendulum can be activated.

The maker, Pieter Visbagh (also Visbagh), was born in 1634 and apprenticed to Salomon Coster in 1646. After he had finished his apprenticeship in 1652, he moved to Middelburg, where he probably worked with Adam Oosterwijck, father of the famous Severijn, who also worked for Huygens after Coster’s untimely death in 1659. Visbagh took over the workshop from Coster’s widow, including the young apprentice Christiaan Reijnaert. Visbagh became the most prominent clockmaker in The Hague and became the first master of Clockmakers’ Guild there, which was founded in 1688. Little is known about his time in Middelburg as the municipal archives were lost as a result of the bombardment at the end of WWII. His production was vast and the variety of clocks show the development which the Hague clock went through. He also made night clocks. He died in 1722.