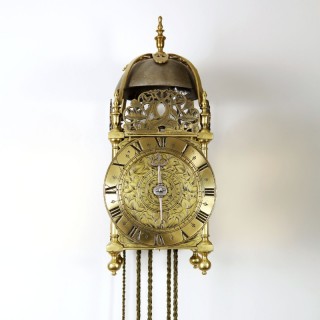 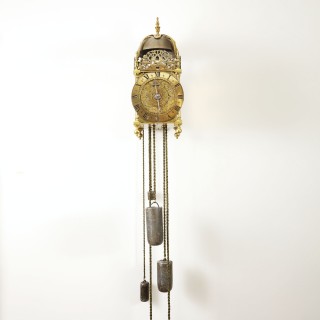 An English 17th century lantern clock made of brass and iron, c. 1665-70. The clock consists of going and striking trains, as well as an alarm and is driven by lead weights. The front fret shows two engraved dolphins and floral and foliate motifs. The corners and the centre of the dial are richly engraved with tulips and a Tudor rose. Unusually the side frets are engraved too.

The maker has signed the clock on the front: Johannes Quelch in Oxford

The time is indicated by a single iron hand on the brass chapter ring with Roman hour, half-hour and quarter-hour divisions.
The day-going movement has going work with verge escapement and balance wheel (reinstated). Its duration is about 12 hours and it is regulated by adding or removing lead shot to the going-train weight. The striking work, which is controlled by a countwheel, indicates each hour fully on a bell, mounted in an embellished bellstrap. The alarm is set with an alarm disc, the alarm time being indicated by the tail of the hand and shown on the disc in Arabic numerals for each hour and typical half-hour divisions.

The clock is fully restored and in excellent condition. It comes with a three-year guarantee
The maker, John Quelch, was born c. 1640, son of Richard, who was also a clockmaker and who apprenticed him in 1652. After his father’s death he continued his apprenticeship with his elder brother Richard. John probably died in 1699. There is a watch known made by him and some lantern clocks.