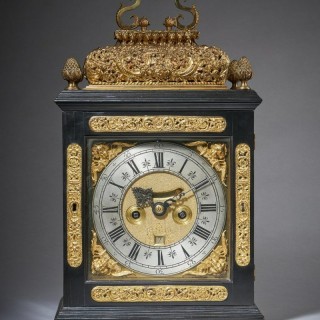 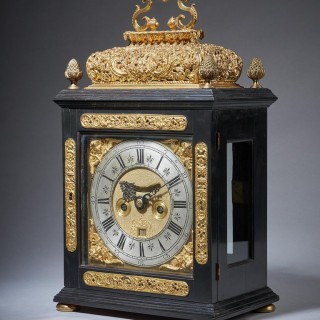 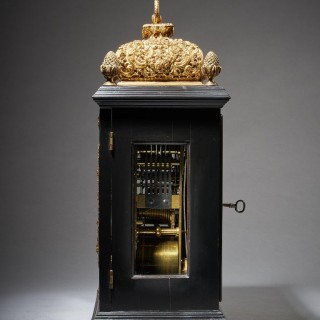 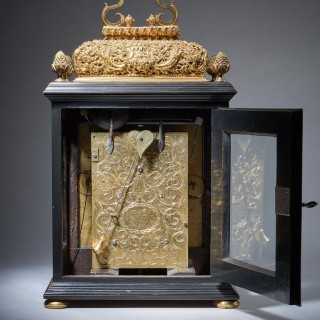 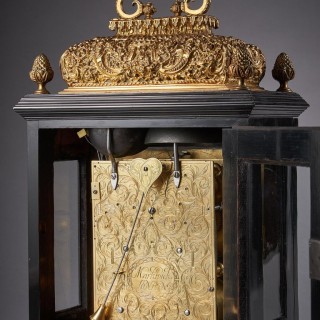 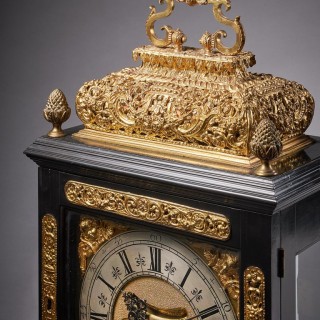 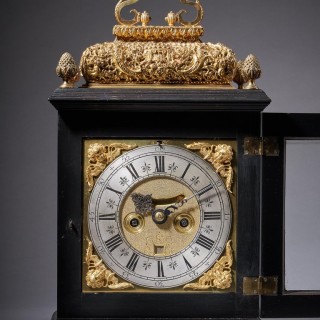 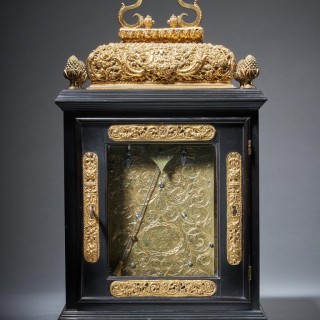 The elegantly proportioned ebony-veneered basket top case has fine cast brass ornaments to the door and rectangular windows to the sides so that the exquisite movement is almost entirely visible. The case rests on four fire-gilt brass bun feet.

The fine square brass dial with matted centre and ringed winding holes has an applied silvered chapter-ring, a date aperture above the VI, a false pendulum aperture under the XII and gilded winged cherub-head spandrels in the corners. The chapter ring is engraved with a narrow outer minute ring within Arabic five-minute numerals and 7½-minute markers, a central ring of Roman hours I-XII and half-hour markers and an inner ring divided into quarter hours. The elegant blued steel hands are finely pierced. The dial is signed on a silvered plaque behind the false pendulum, Markwick Londini.

The striking eight-day twin fusee brass movement, of which one of the five pillars is latched, has early fusees with open click work and unusual steel securing caps, and verge escapement with a short knife-suspended pendulum. The striking, which is regulated by an internal rack, indicates the hours fully on a bell. The backplate is profusely engraved in period style around a typical signature cartouche with the maker’s name: Markwick Londini. The movement has pull-quarter repeat on six bells differing in pitch.

The maker
James Markwick (c.1662-1716) was apprenticed to Edmund Gilpin in 1656. He married his master’s daughter around 1660. He is recorded to be active as a clockmaker in Croydon between 1661 and 1664. He was free of the Clockmakers’ Company in 1666. After this date, he lived in Coleman Street in London. In 1673 he succeeded to the property of the well-known clockmaker Samuel Betts. He had several apprentices over the years, among them his son James. Several longcases, as well as watches of his, are known, but spring-driven table clocks are rare. His son James followed in his footsteps, who later joined up with Robert Markham to form the renowned business Markham Markwick.

It should be noted that this is a sensational clock by a great maker and in the most wonderful condition throughout.