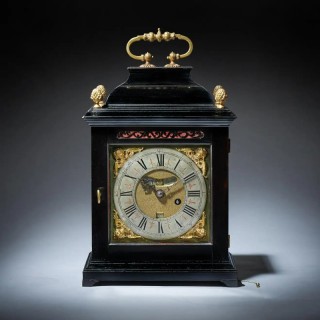 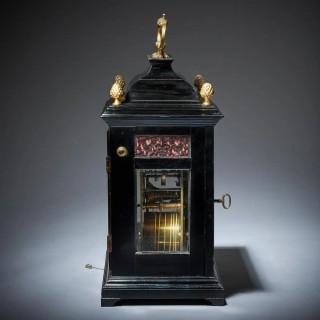 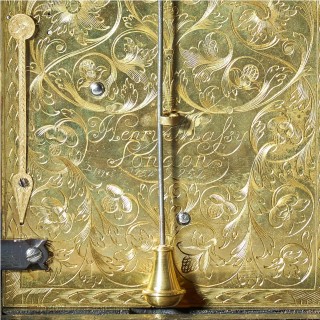 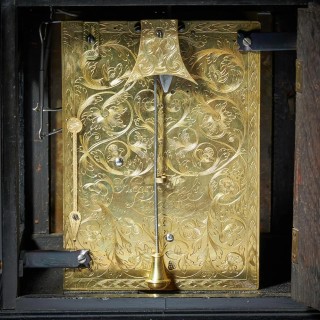 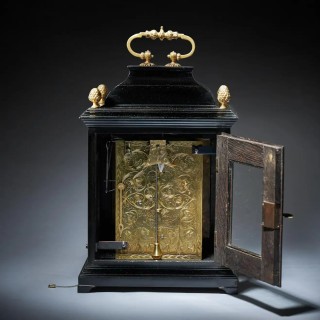 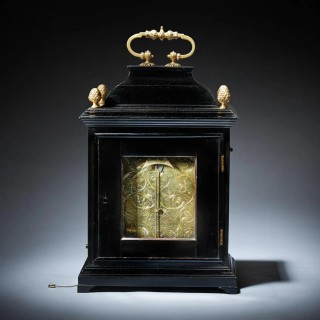 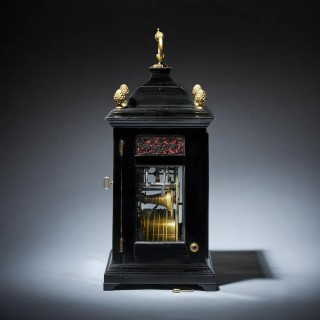 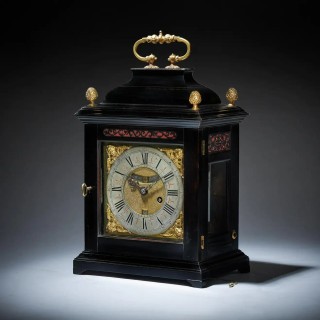 The elegantly proportioned ebony-veneered early inverted bell top case has windows on all sides so that the movement and the engraved backplate can be admired. The front and the sides have pierced wooden silk-backed sound frets above the glazed panels. It has cast brass pineapple finials to the corners, is surmounted by a shaped hinged carrying handle and rests on wooden bracket feet.

The fine square brass dial with matted centre has a narrow applied silvered chapter-ring, date aperture, false pendulum aperture, and gilded winged cherub-head spandrels. The chapter-ring is engraved with a narrow outer minute ring within which are Arabic five-minute numerals, a central ring of Roman hours I-XII and red half-hour markers and an inner ring divided into quarter-hours. The elegant original blued steel hands are finely pierced. The dial is signed on a plaque behind the false pendulum Massy London

The eight-day single train fusee brass movement has verge escapement with a short knife-suspended pendulum. The backplate is profusely engraved in period style around a typical signature cartouche with the maker’s name: Henry Massy London. The movement has pull-quarter repeat on two bells differing in pitch, and a larger hour bell.

The maker
Henry Massy, also Massey (c.1664-1720) was the son of Nicholas Massey, a Huguenot immigrant and well-known clockmaker. Henry was made a Free Brother in the Clockmakers’ Company in 1692. He was married to Anne Brissett in 1691. He was established in St James Westminster. Several longcase, as well as numerous watches and bracket clocks are known.