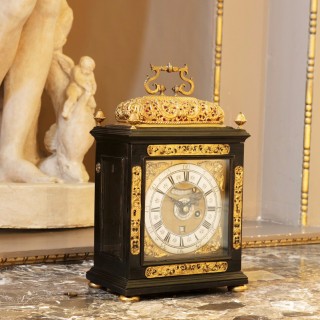 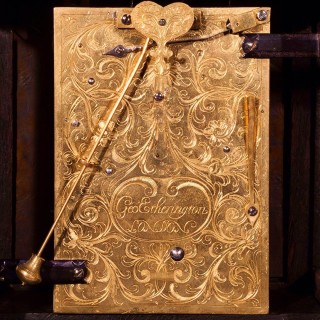 The late 17th century, ebony- veneered table clock with alarm and pull quarter repeat on two bells, signed on the chapter ring Etherington London, and on the backplate Geo Etherington LONDON, circa 1695-1700. The ebony veneered, basket-top case has glazed windows to the side and is surmounted by four pineapple finials and a shaped carrying handle. The front door is embellished by a gilt-brass repousse ornaments, mirroring the basket whilst the top one functions as a sound fret. The case rests on four gilt-brass bun feet. The 7-inch dial is of classic design for a late 17th century table clock, with winged- cherub spandrels around a silvered chapter ring, and a false pendulum aperture and a date aperture in the matted centre. The time is indicated by an elegant pair of pierced, blued hands and behind the hands is a silvered alarm disc, visible to set the alarm. The brass, eight-day movement has a going train and a quarter pull-repeat train, as well as an alarm. The going train driven by a spring in a spring barrel via a gut fusee has verge escapement, the verge directly attached to the pendulum with knife edge suspension, secured by an elaborate pierced and engraved apron. The repeat is activated by pulling a cord to the left of the clock, whilst the alarm is activated in a similar fashion on the right-hand side. The backplate is elaborately engraved around the signature cartouche. The movement is secured by two blued steel bracket of typical shape for Etherington.