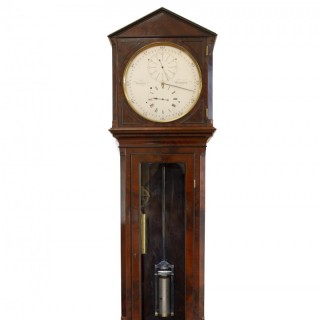 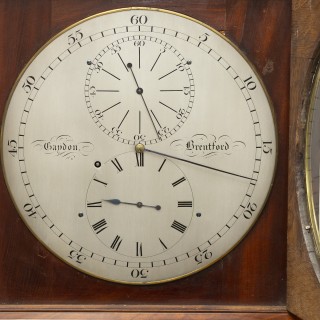 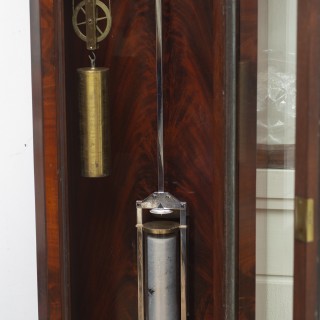 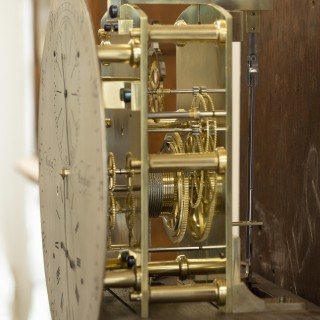 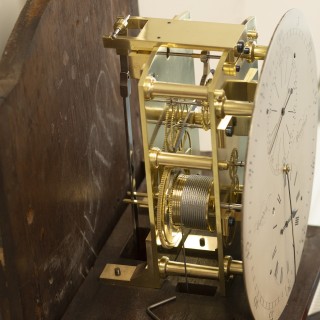 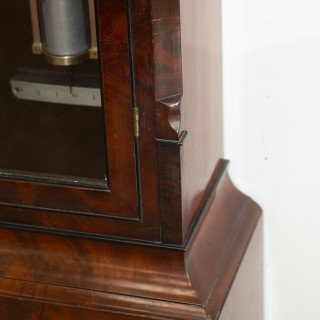 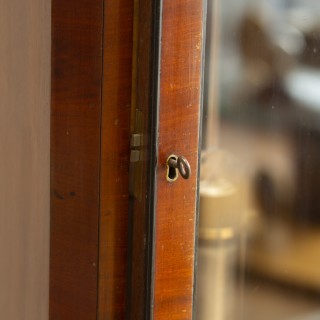 A very elegant regulator longcase clock by Gaydon of Brentford, the architectural case in typical Regency styling. The case-maker has designed and produce a beautifully proportioned small clock using the finest flame mahogany veneers with canted corners and ebony detailing. The doors have stayed absolutely flat, unlike most. They fit beautifully within their apertures.

The substantial timepiece 8-day movement has massive arched plates united by six pillars, and supported by similarly massive L-shaped brackets onto the original seatboard. The movement has a deadbeat escapement, a high pinion count, and all wheels with six crossings. The escape wheel is screwed onto its collet. The front-plate is stamped with the initials FD. The movement exhibits many characteristics and qualities of regulator clock movements made by Thomas Leyland and supplied to many other clockmakers, including Frodsham and Condliff.

The temperature compensating pendulum with mercury-filled glass jar is suspended from a heavy bridge at the top of the movement, with beat adjustment on the crutch.

This clock has just been sold by the descendants of the maker, which has helped to preserve the clock’s originality.

Edwin Gaydon (1830-1913) was one of 5 brothers who became clockmakers. They served their apprenticeships in Barnstaple in the 1840s. One stayed on in Barnstaple and the other four moved to the London, Middlesex, Surrey area. Edwin and Henry set up in business at 102 High Street, Brentford, and they continued in partnership from the mid-1850s to the late-1880s. In 1879, the firm of H & E Gaydon, Brentford, submitted the successful tender for the supply of a tower clock to the Central London District School at Hanwell, Middlesex, now the Borough of Ealing, London. [source: “19th Century Gaydon Clock & Watch Makers” by Martin A. Hooper]