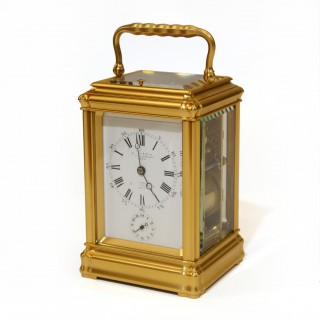 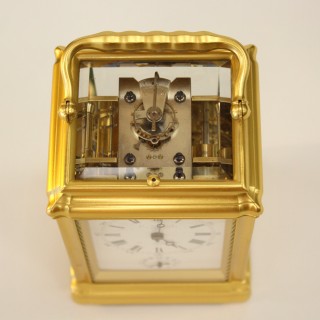 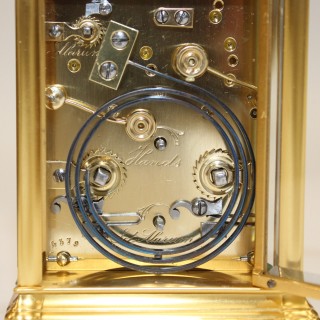 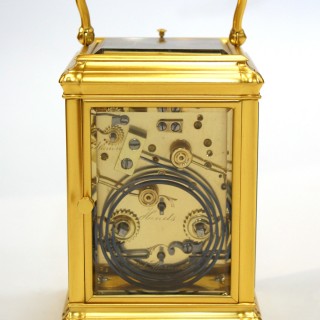 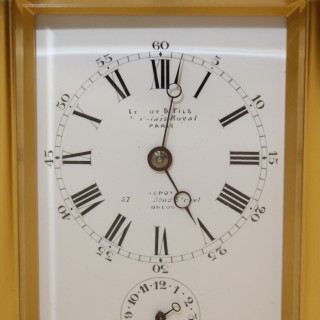 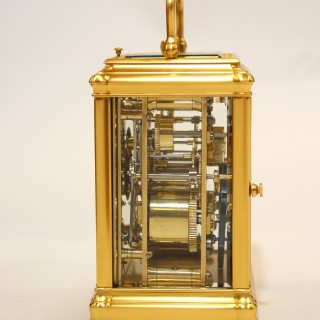 The newly satin finish regilded case is pristine, with a one-way folding handle and perfect beveled glasses to all sides and top.

The gong-striking 8-day movement strikes the hours and the passing of the half hour, and repeats the last hour on pressing the top button.

The backplate is stamped with serial number 4579. The movement is regulated by the original silvered platform escapement.

The white enamel dial has a slanted gilt border to frame it. It is signed LEROY & FILS, 15&18 PALAIS ROYAL, PARIS   57 NEW BOND STREET, LONDON. A small alarm dial sits below the time dial.

The firm of Leroy et Fils was founded by Bazile Charles Leroy in 1789. He was a clockmaker to the Emperor Napoleon, The Duke of Orleans, The Duke of Bourbon and Princess Pauline. In 1823, he filed a patent for self-winding atmospheric clock operated by a weather vane and in 1840 a patent for wind clocks. When Charles Louis died in 1865 his son Louis Leroy took over the running of the business. Leroy & Fils acquired 211 Regent Street sometime prior to 1866, and by 1875 had also acquired 213 Regent Street. By 1885, the firm had moved to Bond Street.

This clock therefore dates soon after 1885.

Note that there is very little to differentiate between this clock and our Drocourt for Leroy carriage clock in terms of the quality of its wheel work and pillars. This is a slightly smaller clock, and does not carry the prestigious signatures and provenance of its earlier counterpart, but nevertheless carries the name of Leroy on the dial.