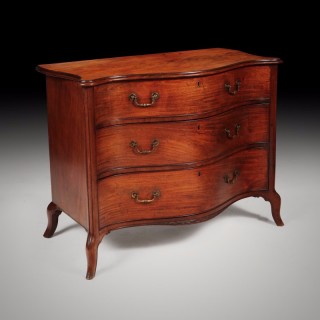 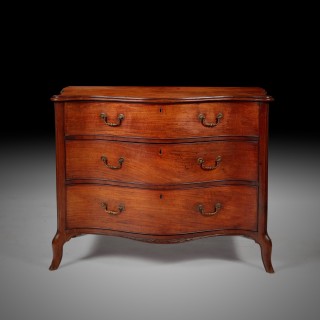 The three graduated drawers retain their original gilt brass handles over a unique carved apron and flanked by molded angles continuing into the shaped cabriole feet.

The provenance of this chest is also very interesting as it belonged to the late Major General Mark Bond, who was the last member of the Bond family to live at Moigne Combe. General Bond had an illustrious military career; he enlisted as a rifleman in 1940 following the Blitz of London. Major-General Bond served at the Battle of El-Alamein and the capture of Tunis. In 1943 Mark Bond was taken as a POW but managed to pull off a daring escape from his transport train. He was only recaptured after trying to steal supplies from the Germans. Major-General Mark Bond also served as aide de camp to Field Marshal Montgomery, NATO Deputy Supreme Allied Commander in Europe 1950. A letter from Field Marshal Montgomery thanking Mark Bond for his service is present at Moigne Combe. During his fascinating life he had a distinguished military career, held prestigious Dorset offices and maintained an active approach to conservation (planting over 60,000 trees on his estate).

Henry Hill was active in Marlborough Wiltshire from c1740 until his death in 1778 where he ran a diverse business encompassing furniture making, coach making, house agency and auctioneering. He was described in his obituary in 1778 as ‘one of the most eminent cabinet-makers and upholsterers in the Kingdom’ which was considered a great tribute to a cabinet maker working outside London. His clients were predominately Wiltshire landowners including the 9th Duke of Somerset at Maiden Bradley, Paul Methuen at Corsham Court, Henry Hoare at Stourhead, and Earl Bathurst at Cirencester Park. Hill was clearly aware of the prevailing London fashions and would have had access to publications including Chippendale’s designs for French Commode Tables (The Gentleman and Cabinet-Maker’s Director 1st Edition1754; Plate LXVI 3rd Edition 1763). He was also known to have employed immigrant labour (most likely German). All this is reflected in the designs of his furniture. His French Commodes were made with a number of variations dependent on his clients’ needs and budgets but invariably with three drawers and of serpentine form with flame figured veneers or marquetry, ormolu-mounted corners and a lobed front apron. The most documented commissions were for Lord Delaval (see bombe marquetry commode sold Bonhams London 19 October 2011). It seems likely that Hill had contact with Pierre Langlois with some of the mounts on his commodes being attributed to Langlois.

The chest is in superb and original country house condition with well-patinated surfaces.