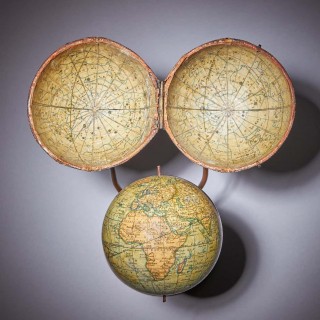 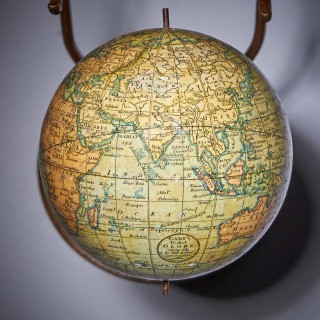 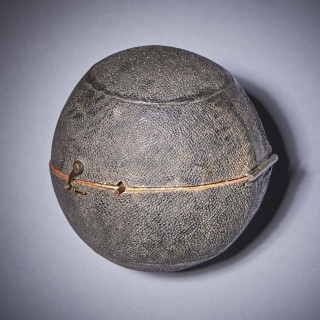 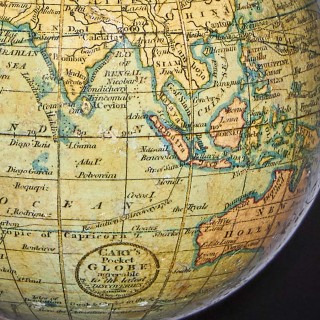 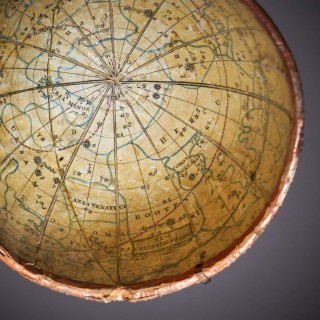 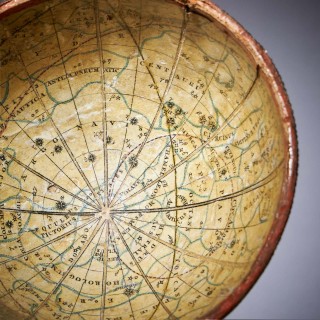 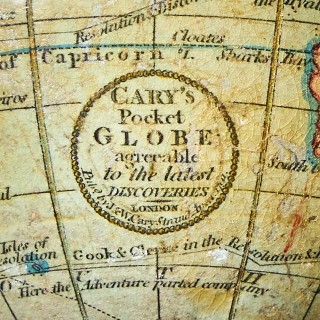 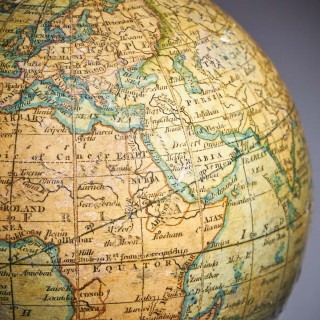 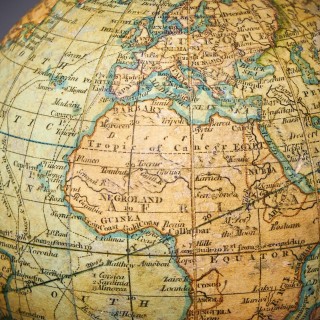 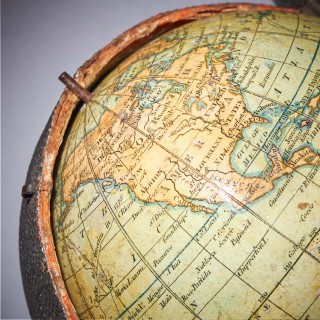 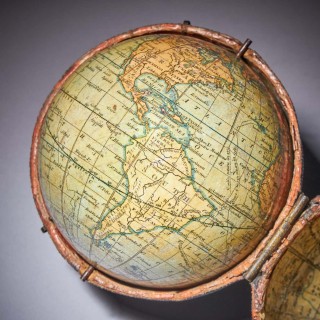 A late 18th century 3″ pocket globe signed and dated 1791. Housed in its original sharkskin case. The interior of the case is laid with gorse depicting the northern and southern celestial hemispheres.

A rare 3-inch diameter example of Cary’s pocket globe in a superb sharkskin covered case with two brass hook and eye clasps. The terrestrial globe, itself 3 inches in diameter, covered with copper-engraved hand-coloured gores applied to a plaster and papier maché sphere, the case lined with celestial gorses.

All three voyages of Captain James Cook are marked on the globe, suggesting both the public and Cary’s fascination with these feats of maritime endeavour.

Voyage One. HMS Endeavour, 1768-71. Cook was instructed to undertake a scientific voyage to the Pacific Ocean. He set sail rounding Cape Horn before making landfall in Tahiti, circumnavigating New Zealand, moving up the East Coast of Australia and finally to Indonesia. The newly discovered Endeavour Strait is marked on the globe between Australia and Prince of Wales Island.

Voyage Two. HMS Resolution and HMS Adventure, 1772-75. Cook was commissioned by the Royal Society to sail south in search of the hypothetical Terra Australis. In doing so, Cook became one of the first known explorers to cross the Antarctic Circle. Cook turned to restock in Tahiti just before sighting mainland Antarctica. Terra Australis was not sighted but, having visited New Zealand, the South Sandwich Islands (‘Sandwich Land’ on this globe) were discovered and named.

Voyage Three. HMS Resolution and Discovery, 1776-79. The official public reason for the voyage was to return a pacific islander, from the second voyage, to Tahiti. In reality, the voyage’s principal purpose was to navigate the Northwest passage. Following a stop in Tahiti, Cook made formal contact with Hawaii, before heading north towards the supposed Northwest Passage. While Cook was ultimately unsuccessful in locating the passage, he became the first to chart the majority of America’s Northwestern coast line.
Cook returned to Hawaii where he had previously stopped en route to America. Following an ill-fated encounter with Hawaiians and an argument over ship repairs, Cook and some of his men were killed. This is commemorated on the globe with the inscription ‘Owhyee where Cook was killed 1779’.

The globe also shows the 1780 return journey of the expedition albeit under the command of John Gore and Captain James King. Cook is not the only explorer to be commemorated: amongst other Mackenzie’s 1789 explorations in north-western Canada, showing ‘Mackenzie’s R[iver]’, a decade before Mackenzie’s own maps were published in 1801.

About the makers:
The notable and much celebrated Cary family of cartographers and globe makers were responsible for some of the finest known globes of the period. Having served a seven year engraving apprenticeship under William Palmer, the firm itself was started in London in the late 18th century by John Cary (1755 – 1835) and located at 181 Strand. In producing globes, John often worked in partnership with his younger brother William Cary (c. 1760 – 1825), a scientific instrument maker. This led to the firm being commonly known as J & W Cary. John is widely regarded as the most influential private map maker of his generation. Both John and William also produced maps and other instruments in addition to their globes. Evidence suggests that it was only the globes that were produced jointly.
The first globes by Cary were advertised in the ‘Traveller’s Companion’ in January 1791. The advertisement mentions that differing sizes of terrestrial globes, including a 3 ½ inch, were available and made from ‘entire new plates’. This was seen as particularly noteworthy – the copper plates for the gores were expensive to produce and often used repeatedly through generations.

See my other listings for the companion celestial globe by Cary.