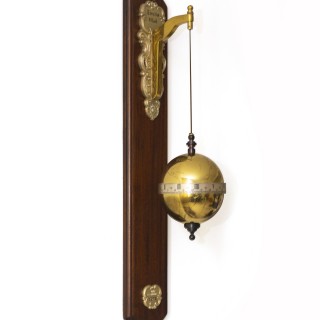 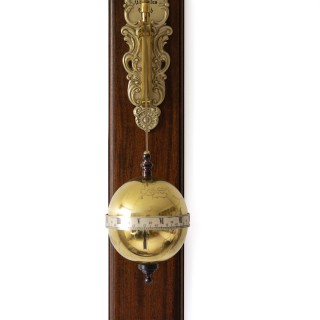 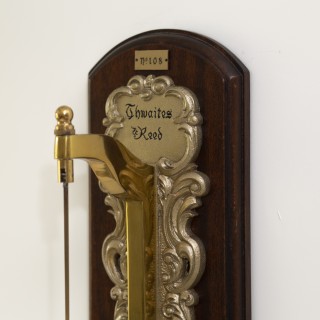 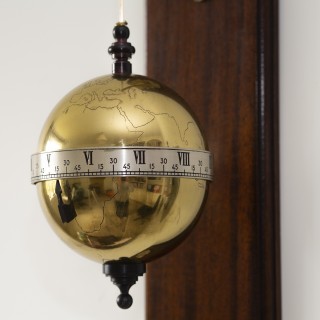 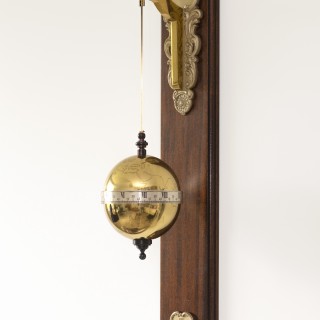 An intriguing gravity clock made as a limited edition in the 1970s by the English clockmakers, Thwaites and Reed. This clock bears a plaque with the serial number 108.

The 8-day weight driven movement with platform escapement is powered by the weight of the globe itself, and built of a quality that would be expected of Thwaites and Reed. It is encased within a gilt brass sphere engraved with a simple world map, suspended on a steel suspension wire.

The centre of the sphere has a revolving silvered Roman and Arabic chapter ring engraved with Roman hours and Arabic 15-minute numerals. A black pointer at the front indicates the time. This style is known as an annular dial.

The clock is suspended from an elaborate lacquered cast brass bracket on a moulded mahogany board, the plaque is inscribed ‘Thwaites & Reed‘.The backboard has an applied brass cartouche inscribed for the first owner, ‘John E.L. Gibbons 1972’.

Over the course of a week, the ball slowly descends as the suspension uncoils. Winding the clock is simply by raising the sphere to the top bracket again.

The clock movement is to be overhauled and guaranteed for 3 years.

Thwaites & Reed produced a limited edition of 500 of this model, then a decade later reproduced a similar version for Franklin Mint.