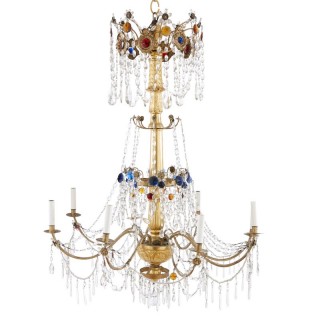 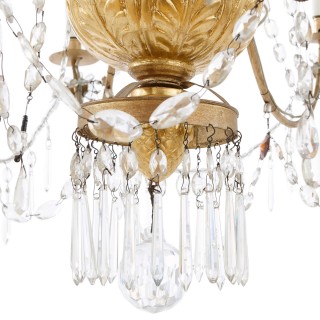 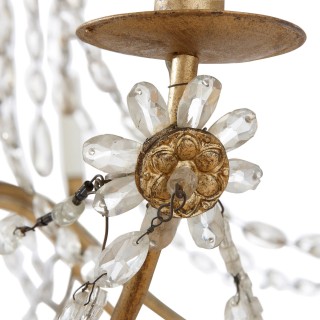 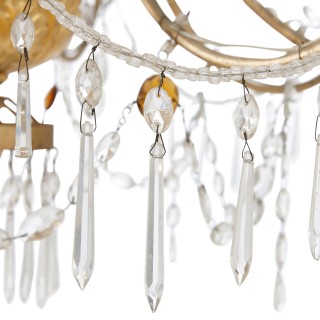 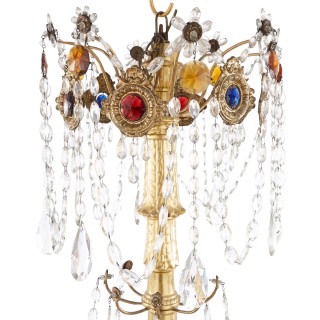 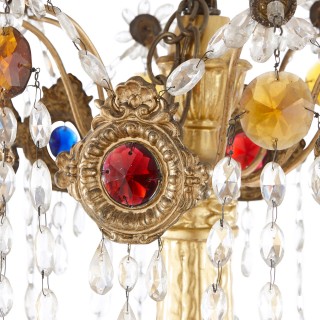 This Italian chandelier is a beautiful, grand piece of design, composed of finely-carved giltwood, faceted clear glass, and jewel-like coloured glass pendants. The item will look wonderful suspended from the ceiling of a grand interior, either traditional or modern in its layout.

The chandelier is composed of a foliate and fluted carved giltwood stem, which is crowned by an elaborate top canopy. This features several brass arms, which terminate in clear cut glass flowers, from which hang orange glass balls, trailing clear glass drops and pears. Red and blue glass medallions, within carved giltwood cartouche frames, are suspended between the arms. Lower down, there are two more tiers of brass arms, both of which are draped clear glass chains. The lowest of the two levels also features clear glass flowers, as well as blue, orange and red glass pendants. At its tip, the giltwood column forms a bowl, which is carved with foliage. From this bowl, there springs eight large brass arms, which curl outwards to support wide drip-pans, capitals and white candle-tubes. Clear glass flowers decorate the arm terminals, and are hung with clear glass chains, featuring cut drops, spears and pears. The column’s giltwood bowl is decorated with a pineapple finial, which is encircled by a brass ring, suspended with clear glass drops and spears.