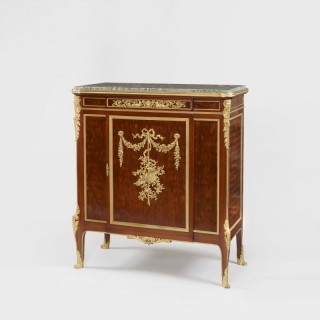 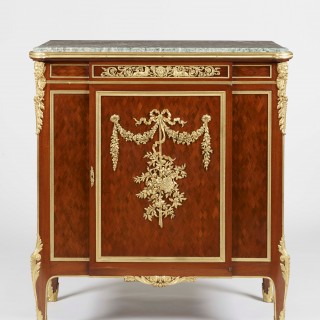 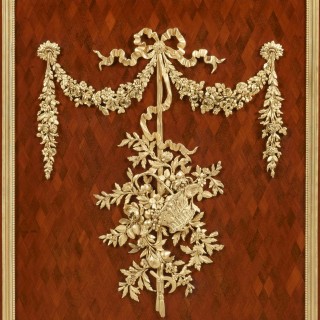 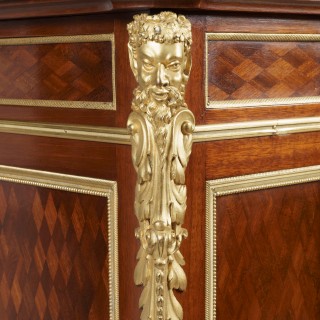 An Ormolu-Mounted and Mahogany Parquetry Cabinet
by François Linke

Constructed in the Louis XV transitional manner, in mahogany parquetry work, and dressed with ormolu mounts of the finest quality, with a Breccia Verde marble platform’ rising from swept cabriole legs, with ormolu sabots and foliate clasps to the knees, the cabinet is of gentle breakfront form, and having a single door, with a rich foliate ormolu pendant bouquet with swags and a ‘lovers knot’ bow over; male mask ormolu espagnolettes to their upper angles, with a rectangular pictorial motif to the apron of disporting putti; the marble platform, with a gentle thumbnail moulding over. Signed by the maker ‘F. Linke.’
French, Circa 1890

The ormolu bouquet on the central panel is a recurring motif of Linke’s œuvre, perhaps most often associated with his largest private commission, the residences of the King of Egypt.

François Linke (1855-1946) is considered to be one of the finest ebenistes and bronziers of the 19th century. He moved from Pankratz, Bohemia where he completed his apprenticeship under the strictest of training, to Paris in 1881, setting up shop in the Place Vendome, and with his workshops in the faubourg Saint Antoine, he quickly attracted a wealthy clientele, appreciative of the excellence of his work. Specialising in the style of the ancien regime and modifying the proportions of the original works to suit the smaller Parisian apartments, he was an exhibitor at the Paris Exposition Universelles of 1878, 1889, and 1900, and at the last, a Gold Medal winner par excellence for his extraordinary Bureau du Roi.