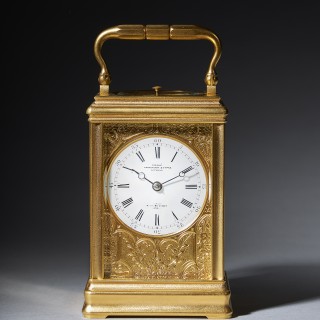 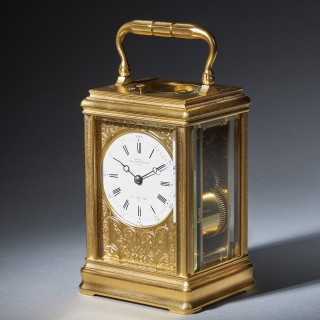 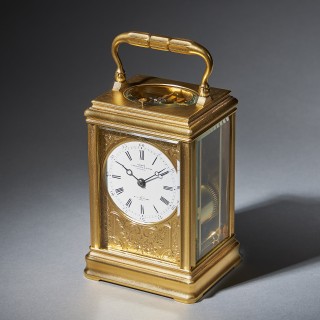 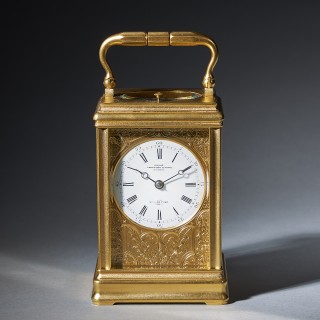 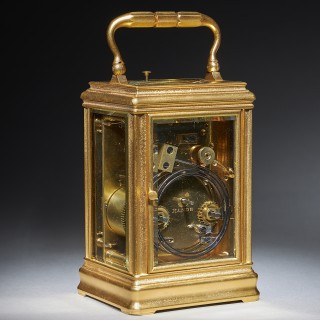 A superb repeating carriage clock with a gilt-brass gorge case by the famous maker Drocourt, circa 1870.

A lovely eight-day striking and repeating carriage clock signed and numbered by the retailer on the enamel dial, GROHÉ PENNINGTON & TYPKE SUCCESSORS 4022 WIGMORE STREET LONDON, circa 1870.

The superb gilt-brass gorge case has facetted glass panels to all sides so that the movement is almost entirely visible. The top has an oval window through which the original gilt brass platform escapement can be seen. At the back, there is a glazed door giving access to the winding and setting arbors. The clock is surmounted by a typically shaped carrying handle.

The circular enamel dial is set in a fine elaborately engraved gilt-brass mask and has a Roman chapter ring with an outer minute track with Arabic five-minute markers. The time is indicated by a fine pair of blued-steel Breguet hands. The retailer has marked the dial in the following manner GROHÉ PENNINGTON & TYPKE SUCCESSORS 4022 WIGMORE STREET LONDON.

The spring-driven eight-day movement of this wonderful carriage clock is constructed between plates. The inside of the backplate is marked Drocourt in an oval. The going train has a high-quality English lever escapement on a gilt platform with hairspring balance and regulation. It can be adjusted by a regulator pin which can be seen through the window in the top and is accessible through the back door. The striking indicates the hour fully and the half hours with a single stroke on a gong. In addition, it has a repeat button at the top, with which the last hour struck can be repeated at will. The backplate is stamped with the Drocourt mark and the word HANDS and an arrow to indicate the function of the arbor and the direction in which to turn.

Note on the makers Pierre & Alfred Drocourt were one of the top makers of carriage clocks in the mid to late Victorian period, having a factory at Saint-Nicolas-d’Ailermont in France, which was the most important town for carriage clock manufacture at the time. They also had premises in Paris at Rue Debelleyme 28 and Rue de Limoges. They produced superb carriage clocks that were often decorative and were awarded numerous awards at exhibitions, such as the Bronze Medal at Paris 1867, the Silver at Paris 1878 and the gold at Paris in 1889. The son, Alfred Drocourt, succeeded his father Pierre Drocourt sometime in the 1870s. Clocks by this maker have become very sought after by collectors.

Note on the retailer James Grohé was a clockmaker and dealer established in Wigmore Street in the period 1832-1880. The company later moved to Cavendish Square and subsequently to Wimpole Street. As James died in 1872, his business was continued by his successors. Several clocks are known by his hand and always of the best quality and sometimes retailed by others, e.g. T. Martin and Co.