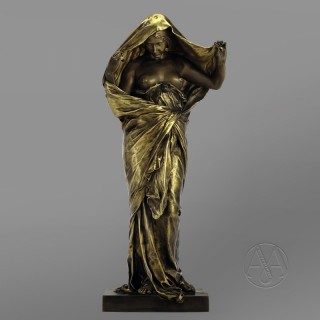 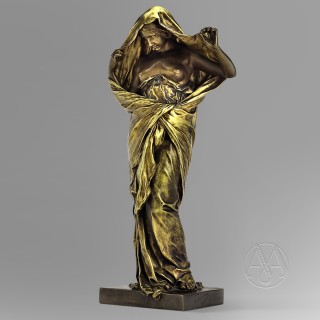 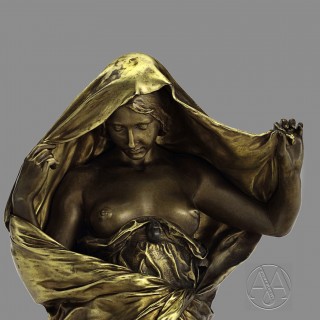 This alluring bronze figure is a finely cast example of Barrias’s most celebrated work, an homage to advances made in scientific exploration and a masterpiece of early art nouveau. The figure depicts a young woman, the allegory of Nature, removing her veil to reveal her face and bare breasts to the cold gaze of science.

The figure first appeared in white marble at the Paris Salon of 1893 as ‘La Nature mystérieuse et voilée se découvre devant la Science’ and was acquired by the faculty at l’Ecole de Médecine in Bordeaux. Barrias returned to the theme a few years later exhibiting a related sculpture at the 1899 Salon, simply titled ‘La Nature se dévoilant’. Following in the spirit of pioneers of polychromy such as Charles-Henri-Joseph Cordier and Eugène Cornu this figure was carved using expensive and luxurious materials such as Algerian onyx for the drapery, lapis lazuli for the ribbon and malachite for the scarab. This figure is now in the collection of the Muse d’Orsay. A final version in white marble was made in 1902 and acquired by the École de Medicine in Paris.

The first bronze casts exhibited by Susse were shown in various sizes and to great critical acclaim at the 1900 Exposition Universelle. Awarded a prestigious Grand Prix at the Liège Exhibition of 1905, the renowned bronzier Théodore Millet deemed the model a tour de force for the Susse firm and proclaimed it ‘the finest of the works exhibited’.

Louis-Ernest Barrias (1841 – 1905) was one of the most celebrated and influential sculptors of the late nineteenth century. Along with contemporaries such as Batholdi (of Statue of Liberty fame), he was influential in re-inventing a new sophisticated approach to allegorical representation, evident in the romantic figure of Nature Revealing Herself, but also in handling themes of modernity such as his Allegory to Electricity for the Gallery of Machines at the 1889 Exposition Universelle.

Born in Paris into a family of well known artists Louis-Ernest started his career as a painter. He studied under Léon Cogniet, before later taking up sculpture under Pierre-Jules Cavelier and following his admittance to the École des Beaux-Arts in Paris 1858, François Jouffroy. In 1865 Barrias won the Prix de Rome and was involved in the decoration of the Paris Opéra and the Hôtel de la Païva in the Champs-Élysées.

In 1878 he was made a knight of the Legion of Honour, an officer in 1881, and a commander in 1900. Barrias replaced Dumont at the Institut de France in 1884 and succeeded Cavelier as professor at the École des Beaux-Arts.

Tracing its origins to 1758, the Paris foundry of Susse Frères is one of the oldest art foundries in Europe. They were appointed suppliers to Empress Marie Louise from 1812 and the Duc de Berry from 1818. Following the 1830 revolution they were granted a Royal Warrant as an official supplier to the monarchy. Originally a stationery company selling small bronze statuettes, the company began to focus on the process of bronze casting as early as 1839 under the direction of the brothers Michel Victor and Amedee Susse. They producing in that year a six-page catalogue of bronze sculpture.

In 1847 they obtained the right to use the Sauvage procedure for reduction, similar to that invented by Achille Collas and employed by Ferdinand Barbedienne. The ability to produce reductions of large scale bronzes enabled Susse to create editions of work in various sizes and opened up the market to collectors. Michel Victor Susse died in 1860 leaving Amedee as the sole director of the foundry until 1880 when Albert Susse became the director.

In the subsequent years Susse Frères obtained the rights to produce editions of the works of some of the most important French sculptors of the nineteenth century including: James Pradier, Pierre-Jules Mêne , Auguste Cain , Pierre-Nicolas Turgenev , Yevgeny Alexandrovich Lanceray, Louis-Ernest Barrias , Jules Dalou , Alexandre Falguière and Mathurin Moreau.

Renowned for the quality of its casting and multipatinated finishes, the firm of Susse Frères exhibited with notable success at many of the great exhibitions of the nineteenth century including a prize medal at the 1851 Great Exhibition in London and a Grand Prix at the 1905 Lieges Exposition Universelle.