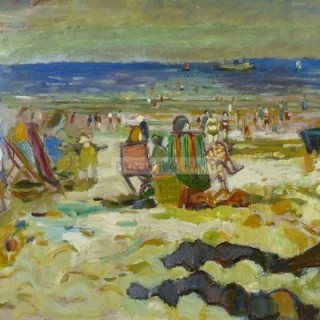 Born in Rotherham, Yorkshire, he attended Sheffield School of Art. In 1935 he won a scholarship to the Royal College of Art under John Nash. He later became head of the Department of Lithography at the College from 1948 until his death. La Dell was appointed as an official war artist during the Second World War, working on both public murals and camouflage,[1] but his best known works are those from the post-war era, in particular the lithographs he created for the coronation of HM The Queen, for the School Prints scheme and for Lyons Tea Rooms. His work is currently held in many collections, including those of the Royal Academy, the Government Art Collection and the V & A.

Originally sold at Christies about twenty years ago by the artist’s family. Record of auction catalogue viewable at the Witt Library, Courtauld Institute.