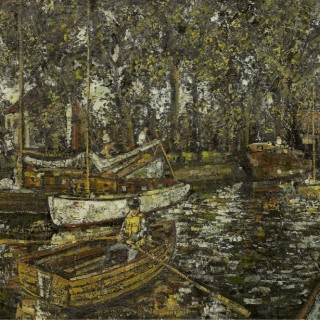 Plosky was presumably of wartime immigrant stock, his parents fleeing the fascists of one shade or another in Eastern Europe. Born at the beginning of the Second War he studied at Hornsey College of Art and his work is generally of the dour aesthetic that characterises postwar British Art. He must have had a connection with North Wales as so many of his paintings are of grey skies over grey mountains of slate, punctuated by the odd workers cottage. They are beautifully painted and an almost cartoon like work of a crowded motor, My Mate’s Car, now hanging in Glasgow Museum proves he had a strong sense of humour. This is an unusual subject in Plosky’s canon, more for the colour and optimism in the painting, than that it is Norfolk not Snowdonia.

Plosky studied at Hornsey College of Art before leaving to become a designer and illustrator. He continued to paint throughout his career and exhibited frequently at the Royal Academy and the Royal Society of British Artists. His work can be found in the permanent collections of Glasgow Art Gallery, the National Library of Wales and the University of Portland, Maine, USA.