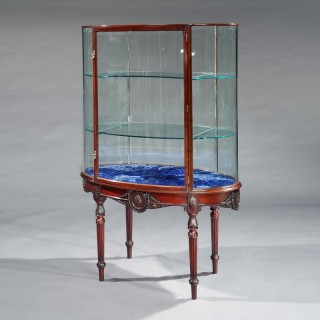 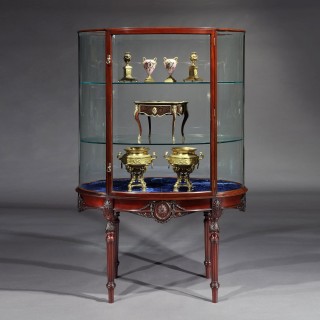 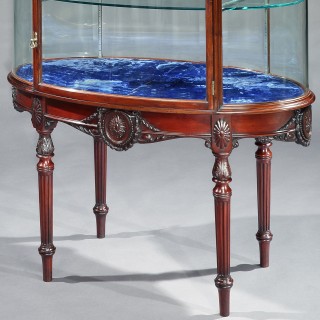 A Display Cabinet in the Adam manner By F. Sage & Co

An Unusual Edwardian Display Cabinet
in the Adam manner
By F. Sage & Co

Constructed from solid mahogany, the oval display cabinet supported on turned and reeded legs, its apron decorated in the delicate manner of Robert Adam depicting husking garlands and dressed with paterae to the fasciae. The lockable door enclosing an adjustable shelved interior with original velvet lining. The original curved glass and high-quality bronzeware used in the construction of this cabinet were a fundamental characteristic of the excellent craftsmanship of Sage & Co, who was furnishing Harrods when this cabinet was made. Stamped by the maker “F. Sage & Co 1905 Ltd / Shopfitters / London.”
English, circa 1905

Frederick Sage & Company was one of Britain’s top shopfitters, supplying and manufacturing high quality fixtures, fittings, furniture and even shopfronts for some of the most illustrious department stores around the globe. Founded in 1860, the company gained its reputation exhibiting at the Centennial Exhibition of 1876 where their showcases brought them an award. In 1900, Sage & Co was the exclusive shopfitter for Harrods, a massive project which would last 5 years. Commissions for the newly incorporated firm soon followed including the interiors of Selfridges and Galeries Lafayette, as well as at least 28 individual shops along the fashionable Regent Street. The company operated until 1992.

A Display Cabinet in the Adam manner By F. Sage & Co